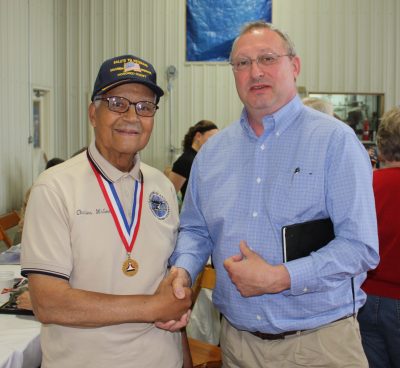 (Photo: Col. Charles McGee and me)

It was my great honor to meet an American hero this weekend. While traveling in Missouri, I visited my brother Richard, a retired Sergeant Major in the Missouri National Guard who also holds the honor/duty/burden of being the parade boss for Columbia’s Memorial Day Parade. As part of Memorial Day weekend festivities, the city also hosted the two-day Salute to Veterans Air Show at Columbia Regional Airport. Friday evening, Rich took me along to the pre-air show dinner (can you really call it a banquet when everyone’s wearing coveralls?) and introduced me to several of the honorees, including one of the surviving Tuskegee Airmen, Col. Charles McGee (Retired).

To find out more about Col. McGee, check out his bio. I also had the honor of meeting some members of the U.S. Army Golden Knights parachute team Friday, and got to listen in as my brother coordinated details for their participation in today’s parade. The Golden Knights were featured in the Columbia Tribune’s coverage of the air show.

I wish I could have stayed for the air show and today’s parade, but home was calling. Thanks to veterans everywhere for their service, and double thanks to my bro, who entered the Army in 1970 and retired after 34 years, but still serves.  Good luck with the parade, Rich!