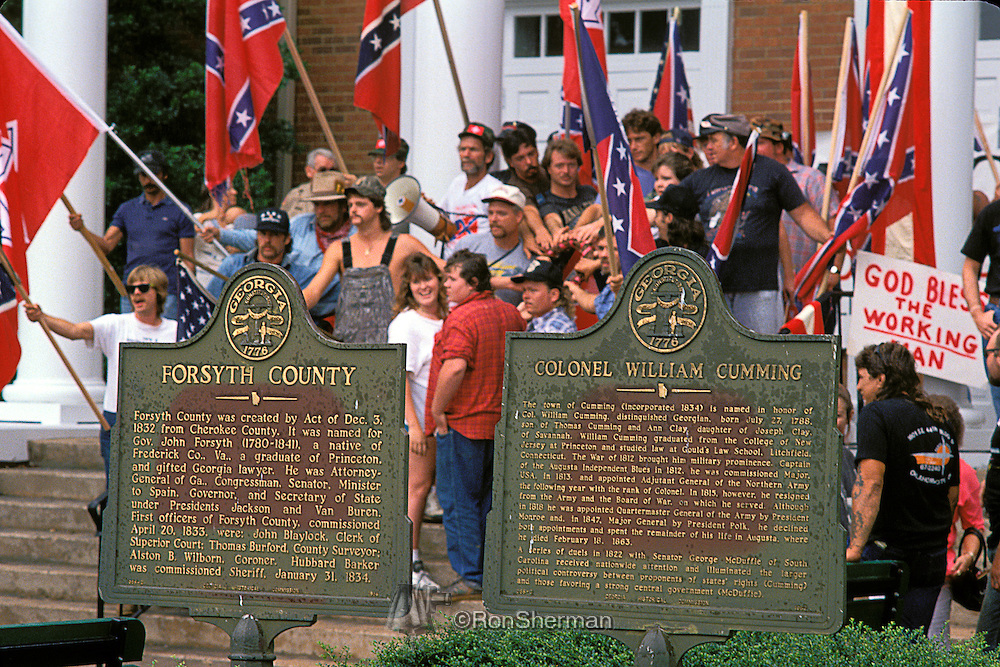 Above: Klan rally at Forsyth County courthouse in 1992

Coincidentally, a technician came to my north Atlanta house yesterday to work on my Internet service. During the course of our conversation, he said he’d been working recently in Forsyth County. Since he was black, I asked him, “How’d that go?”

He gave me a wry smile and said, “It was different.”

If this comes as a surprise, you mignt want to skip down to the bottom of this post for some background.

He said when he was working in Forsyth, he’d gotten several negative service reviews, which had surprised him, since he didn’t have any conflicts with customers while he was working and hadn’t ever gotten negative reviews before. He mentioned that one of his co-workers had shown up and was denied entrance to a Forsyth County household. The customer demanded to speak to a supervisor. When the supervisor arrived, the customer said they wouldn’t let a black man in their house. The supervisor then informed the customer that they wouldn’t be getting service from the company.

Anyway, the tech said he asked for a transfer out of Forsyth due to the inexplicable bad reviews. I’ll certainly give him a good review, and while he was at the house, he was taking calls from other techs asking for help and advice, which is a sign he’s fairly high up on the food chain.

He also told me he was out one day riding with a Forsyth County man who pointed to a hill and said, “That’s where they hung the blacks.”

There’s no record of lynchings in 20th century Forsyth County, other than the one in 1912. That isn’t to say more didn’t happen—they just might have been private affairs. Attacks on blacks have been well documented even into the 1980s, however— and that’s not counting Hosea Williams’ first march in 1987, when he and his small band of supporters were run out of the county. Black Boy Scout troops from Atlanta were chased from campgrounds at Lake Lanier, black truck drivers from Arlanta reported being fired upon as they made deliveries, and African-American families had their picnics interrupted by death threats. For decades,  signs were posted at the county line warning blacks to stay out, and many locals enforced it with rifles and shotguns.

Legends abound: A black friend once said that an uncle had been lynched in Forsyth County, and I’ve talked to a young black woman whose grandfather, who lived in North Fulton County, always carried a shotgun in his pickup in case of “Trouble.”

Forsyth County, famous as the birthplace of Hee-Haw’s Junior Samples, has for most of the past century, existed as an intentionally all-white community bordering the black Mecca of Atlanta since 1912, following one of the 20th century’s most violent racist outrages—including lynching, nightriding, and arson.

In 1987, the sleepy community gained notoriety when a small march led by civil rights firebrand Hosea Williams was broken up by rock- and bottle-throwing Klansmen, neo-Nazis, and their sympathizers. Bloody but unbowed, Williams returned the next week with 25,000 followers in one of largest civil rights marches in history.

There was talk of reparations. Oprah came to Forsyth and taped her show. Protests and counter-protests yielded a landmark Supreme Court case on free speech. But most importantly, white people flocked to Forsyth. It became the fastest- growing county in the nation, the richest one in Georgia, and one of the twenty wealthiest in the U.S.

Since 2000, members of ethnic minorities have moved to Forsyth County in increasing numbers. In 2010, approximately 85 percent of its residents were white—a dramatic change from the 99-plus percentages of decades past.