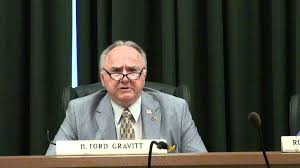 There were some habeas corpus issues in Brambleman, but this is real.

Nydia Tisdale, who runs the AboutForsyth.com blog (“Investigating Corruption in Forsyth County, GA”), has ruffled some feathers up there, and apparently she was up there doing some more ruffling the other night. She was there to record discussion about a water contract with Forsyth County; the mayor decided that she shouldn’t. He commanded the police chief to remove the camera (and her with it) from council chambers. You can see her Youtube posting of the incident here. (The trouble begins when the meeting is called to order, at the 2;15 mark, and Ms. Tisdale protests all the way out the door.)

“We don’t allow filming inside the city hall here unless there’s a specific reason,” Gravitt declared. (These newfangled technologies take a while to catch on.)

Mr. Gravitt has it bass-ackwards (semantics in honor of Lake Lanier). Under Georgia law, officials don’t allow open access to government proceedings for specific reasons, since public access is the norm. No. The law allows officials to deny access due to specific reasons: personnel matters, land sales and purchases, and attorney-client discussions. As a matter of fact, the General Assembly revamped Georgia’s Open Meetings and Open Records laws during the 2012 session, and Gov. Nathan Deal recently signed the bill into law. You can read the attorney general’s summary here.

In WSB-TV’s coverage of the local controversy (kudos to them for doing so), Gravitt makes the outlandish claim that either still cameras or videos can be used during a meeting, but not both.  He thinks the law is “complicated.” He also said allowing one camera “would embolden multiple people” to do so (the old “cameras into the tent” argument.)

That’s nonsense, of course. There’s nothing complicated about it at all. Gravitt felt like throwing Nydia Tisdale out of the meeting, so he did. Now he looks like a fool trying to defend his actions. WSB reporter Mike Petchenik asked him what he would do if TV crews came up to Forsyth County to cover a meeting, and he said, “We’ll cross that bridge when we come to it.”

For the record, Ms. Tisdale calls the violation of her First Amendment rights “egregious.”

This incident shows why a lot of relative newcomers to Forsyth grumble about the secretive ways of the community’s old-time leadership. To get an idea of how things work, check out this post on the Forsuth County sheriff’s recent troubles.

I’m a former reporter, and I can tell you from experience that some government officials will  try to cut off access if they don’t like the kind of attention they’re getting. I doubt that they like Ms. Tisdale’s coverage one bit. If they get away with it, shame on us. Freedom of the Press: This is a basic right that requires eternal vigilance.

Hey, Forsyth County Tea Party. Where are you on this one?