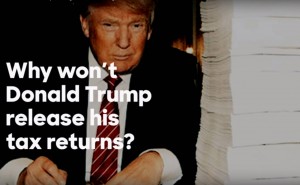 RE: THE AMERICAN PEOPLE CARE ABOUT YOUR TAX RETURNS

During your recent (and rare) news conference, you ridiculed the idea of making your tax returns public, something you had promised to do during the presidential campaign. You claimed “the only one that cares about my tax returns are the reporters, okay? They’re the only ones.”

WRONG! Voters care very much because we need to understand the nature of your business organization and its potential effects on public policy, especially in areas of real estate holdings and dealings, foreign policy and trade, Wall Street relationships, and possible conflicts of interest, to name a few. Tax returns give a much better picture than the financial disclosures candidates are required to file

In a recent Pew Research poll, nearly two-thirds of Americans think this issue is important and that you have a responsibility to make your returns public—something every president since Nixon has done. Nixon! Do you want to be less transparent than our nation’s shadiest POTUS? In fact, polls have consistently shown more than 60 percent of voters are concerned about this issue, leading Politifact to judge your statement at the news conference FALSE.

The same is true on social media. U.S. Senator Ron Wyden’s recent Tweet, “Retweet if you care about @realDonaldTrump’s tax returns,” was retweeted more than 84,000 times, so far. That’s a far greater number than even you get on yours.

There’s been widespread erosion of trust in your incoming administration due to questionable picks for Cabinet and White House positions, failure to divest business holdings, and disturbing daily revelations about your relationship with Vladimir Putin and Russia. You must act strongly and decisively to restore this diminishing confidence, instead of bashing the media.

Time is running out. Release your returns.