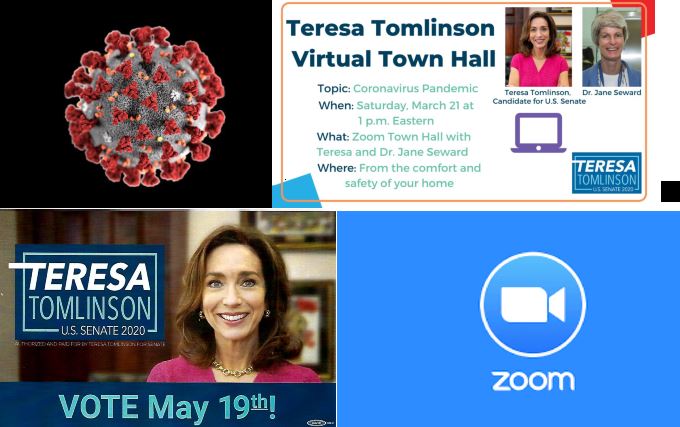 Last week, I interviewed former Columbus mayor Teresa Tomlinson, a Democrat running in the May 19 primary for a shot at unseating Republican incumbent David Perdue–or in her words, “send Perdue packing.” Tomlinson talked about problems and fixes, most notably expanding Medicaid.

With experience both as an attorney and elected official, Tomlinson takes law and government seriously. She often discuses the Constitution and the role of government in people’s lives. Even before she was a Senate candidate, she spoke out on impeachment issues. She’s posted 14 policy papers on her website. Her major Democratic opponents, Sarah Riggs Amico and Jon Ossoff, have not troubled themselves with such details. It’s like she’s actually willing to prove her case that she’s the candidate to beat Perdue.

Much has happened since we spoke, and this post has turned into an omnibus of sorts. I am updating some of her responses, using tweets and statements Tomlinson has made. Campaigning has changed in the age of Covid-19. Now practicing social-distancing, Tomlinson is holding a series of online public meetings and town halls instead of in-person events. To participate, sign up here. 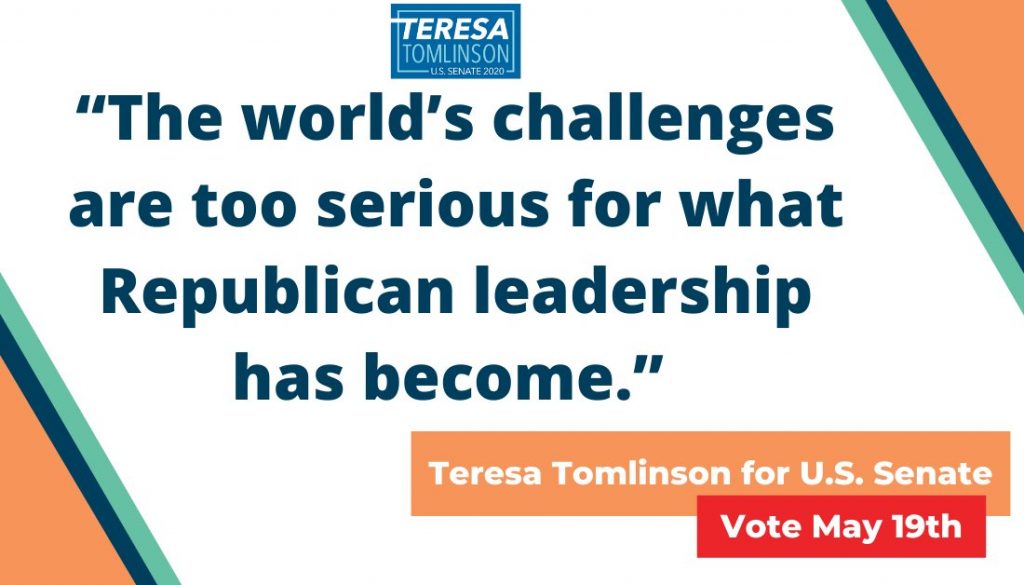 The coronavirus pandemic has disrupted our world, and we are bombarded with grim news. As the death toll mounts, hospitals and healthcare workers are stressed and supply chains are stretched thin. Federal, state, and local governments struggle to deal with the public health crisis.

At the epicenter of the federal response stands President Trump, who seems determined to prove his harshest critics right. If you don’t get your information from Fox News, you may have noticed that his administration has bungled its response the crisis. Trump downplayed the threat at first, treating it largely as a public relations problem. He also dismantled the National Security Council’s pandemic response team and ignored the plans the Obama Administration developed for dealing with such a crisis–among other things.

The dire predictions about Trump’s performance under pressure are playing out. In a recent article, New York Times reporter Peter Baker summed it up neatly:

Mr. Trump’s performance on the national stage in recent weeks has put on display the traits that Democrats and some Republicans consider so jarring — the profound need for personal praise, the propensity to blame others, the lack of human empathy, the penchant for rewriting history, the disregard for expertise, the distortion of facts, the impatience with scrutiny or criticism. For years, skeptics expressed concern about how he would handle a genuine crisis threatening the nation, and now they know.

Trump’s egotistical bungling of the crisis has led the opposition to use his own words against him in ads. With typical bluster, Trump has demanded TV stations cease and desist running the spots, thereby drawing even more attention to them. Meanwhile, media critics call on cable news channels to quit airing his coronavirus briefings live, due to the amount of misinformation and outright lies Trump spews. Nevertheless, Trump persists, and his reality-TV approach to the crisis seems to be working, at least temporarily. His approval numbers are moving up. If that seems surprising, bear in mind he’s getting the same load of daily free publicity he received in 2016. When. Will. We. Learn.

Some of Trump’s misinformation is downright dangerous. A headline today stated “Dr. Donald Trump peddles snake oil and false hope.” Most specifically, Trump’s been pushing a drug used to treat malaria and lupus for Covid-19. Some people took his advice, with fatal consequences. In a tweet, Tomlinson called this “another reckless, dangerous action by the president. Pharmacies are out of stock of hydroxychloroquine – a life saving drug for some 1.5 million Americans who suffer from Lupus.”

After 9/11, President George W. Bush preached tolerance, seeking to shield American Muslims from bigotry and Islamophobic outrage. Trump’s not having any of that preachy stuff. He’s been calling Covid-19 the “Chinese Virus,” to deflect from his incompetent response to the pandemic. He doesn’t care where the blame he casts lands. Unfortunately, it’s landing on Asian-Americans. While there was word he was backing away from that nomenclature,  there’s also this: “G-7 failed to agree on statement after U.S. insisted on calling coronavirus outbreak ‘Wuhan virus’.”

“At best, it’s juvenile. And at worst it’s xenophobic—and bigoted, frankly. We’re not immune to having a serious virus begining up in this country—are we to blame for that? It’s ill-advised to villainize a country of origin. It serves no purpose other than to inject fear, ignorance and division, as (Trump) is apt to do. That’s his thing.”

Last word: “It mattered not from whence it came.” — Daniel Defoe, A Journal of the Plague Year. Defoe wrote this three centuries ago.

Concerned about an economic downturn negatively impacting his re-election chances, Trump is also pushing a quick end to this business of social distancing and self-isolation, despite medical experts’ uniform advice that this is how to quell the spread of the disease. The president even has a date in mind, April 12. He envisions churches across America packed with worshipers. What a beautiful sight! 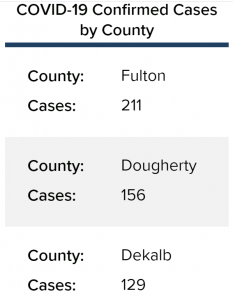 There’s no science to that, of course. AJC’s Jolt today reported that during a conference call between Georgia Governor Brian Kemp and several hundred clergy members, state Public Health Commission Dr. Kathleen Toomey warned about the dangers of this. The newspaper reported that she said “virtually all the cases” of Covid-19 outbreaks in Albany, Bartow County, Dublin and Rome were linked to “large church services.”

In Dougherty County, the outbreak was traced to two funeral services in late February and early March. Today, Dougherty has the second-most confirmed cases of coronavirus in the state–27 more than DeKalb County, which has a population 8 times greater than the Southwest Georgia county .

Georgia’s senior senator seems at least Easter Death Cult-curious. That Perdue would go along with Trump should come as no surprise. He is, after all, Trump’s “co-pilot.” As a man who became wealthy exploiting low-wage labor, it also shouldn’t be a shock that Perdue would be willing to balance lives against the economy. So, despite medical experts’ dire warnings that breaking the social-distancing regimen would cause needless deaths and wreak even more long-term economic damage, he pushes the idea forward. See for yourself:

We need to find a balance between protecting life and protecting the economy long-term. pic.twitter.com/ulb4d1mIBO

Tomlinson has a completely different take on this. She tweeted: “People are hurting. The economy is shutting down, but we can climb out of this by putting public safety first. That threat is the cause of the rest. Fight and defeat Covid-19 and the rest will renew. Prolong the public safety threat and the economic recovery will be delayed.”

On the state level, Tomlinson has endorsed the call for Kemp to mandate shelter in place restrictions in Georgia, tweeting, “Let’s go Governor. What are you waiting for?”

And … this hasn’t happened. Kemp held a virtual town hall tonight. He still refuses to enact restrictions despite loud cries for a shelter-in-place order from the public. Here’s thread coverage of the event by AJC reporter Maya Prabhu.

Republicans are bad at this governing thing

In discussing Republicans’ handling of the coronavirus pandemic, Tomlinson spoke first in general terms, about the fundamental difference between the parties. “Democrats and Republicans are distinguished primarily on the fact that Republicans don’t believe in a centralized federal government,” she explained. “They believe that states should dictate. And that’s their ideology. So that’s where you get these crazy statements,” she said, citing anti-taxer Grover Norquist’s stated desire “to shrink (government) down to the size where we can drown it in the bathtub.”

“Because Republicans aren’t comfortable with the centralized federal government, and that it’s actually a tool to solve challenges,” Tomlinson said, “their responses to these national challenges (like Hurrican Katrina and the 2008 Stock Market crash) is always chaotic. They just don’t get it. They rush to throw water on flames and don’t think comprehensively about what is the best, most targeted use of this wide government apparatus we have.”

While Tomlinson said Americans need economic relief, and that the economic stimulus plan being debated at the time was “a viable way to keep people liquid in the short term,” she wanted to see some longer-term solutions “beyond sending out cash.”

“We need for people to have broad access to healthcare,” she said. “Why not expand Medicaid? Why not have the federal government take over Medicaid, as I have proposed. Why not absorb that (additional) 10 cents on the dollar? They’re already paying 90 cents on the dollar.”

That way, she added, the government would “make sure that everyone up to 138 percent of the poverty level has access to medical care during this time as part of the response. Get people access to doctors so that so many people wouldn’t have gone to the ER. They would have had a physician to call.”

House Speaker Nancy Pelosi also spoke out on the issue Monday, calling for an expansion of Medicaid to the 14 states that have refused to do so, Georgia among them. Unfortunately, that opportunity appears to have been lost with the $2 trillion stimulus package moving through Congress.

A Democratic majority in the Senate along with the House could make this happen. Georgia, with two Senate seats up for grabs this year, could be a big part of that change.

Georgia’s Perdue and Kelly Loeffler voted, along with all other senators present, for the $2 trillion recovery package, which now moves to the House. This should make it more difficult for Republicans like Perdue and Loeffler to keep railing against Democrats for their socialism, but they’ll probably keep right on doing it, the irony completely lost on them.

In an email to supporters, Tomlinson wrote:

The Senate unanimously passed a $2 trillion economic stimulus package in response to the coronavirus pandemic – one that includes $500 billion in corporate bailouts.

It is not the deal that Democrats wanted, but they did what they could to protect the record 3.3 million people filing for unemployment insurance and millions more with cash payments during this crisis despite having only 47 votes.

As a mayor, public safety director, and head of Homeland Security for Columbus, Georgia for 8 years, I will fight tooth and nail in the Senate to make sure that local communities and healthcare systems have what they need — that’s a promise.

“We have to stop electing grifters. These people are unfit to serve. They don’t deserve to serve." #GOPCorruption #gapol pic.twitter.com/I5or1rt3hL

After our interview, news broke about Loeffler’s suspect stock market dealings following a January briefing she and other senators received on the coronavirus outbreak. She’s received a ton of criticism. Here’s a useful update from the Jolt.

While Tomlinson said, “We have to stop electing grifters,” technically, Loeffler hasn’t been elected to anything yet. And based on public outrage, even among Republicans, that might remain the case. Tomlinson also put out a statement on the issue.

This story isn’t going away. One recent headline: “SEC warns on coronavirus insider trading after stock sales by NYSE chair, his wife Sen. Loeffler, 3 other senators” And the hits just keep on coming. Sadly for the Senator, along with calls for an investigation–and her resignation–the hashtag #LoeffHerUp has been trending.

It also came out recently that Loeffler, whose social media seems inauthentic to begin with,  wasn’t bothering to write her own tweets, instead merely recycling Republican talking points. She’s really bad at this. 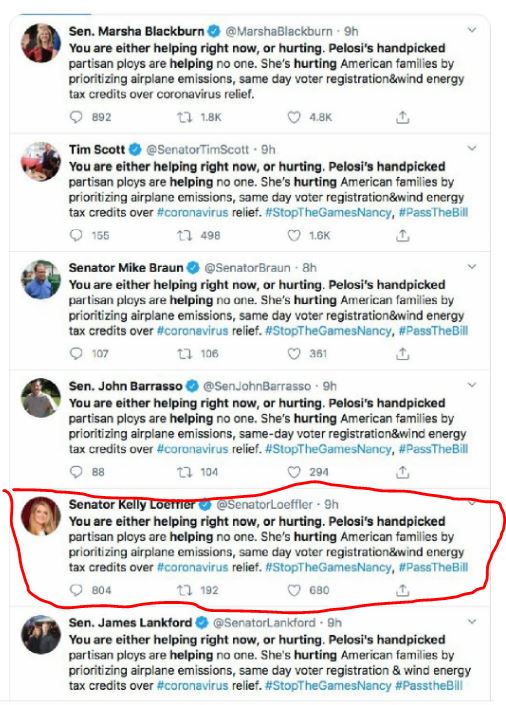