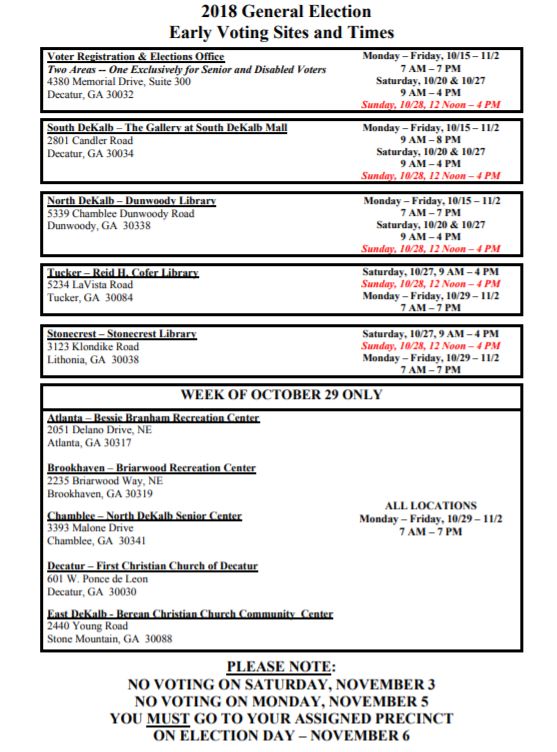 UPDATE: The Board of Elections (presumably the staff) has relocated the Atlanta in DeKalb early voting site to the Bessie Branham Recreation Center, 2051 Delano Drive NE Atlanta, GA 30317. The Board  originally approved Coan Park Recreation Center. No reason given for the change.

During discussion, Executive Director Erica Hamilton said that the DeKalb Board of Elections has about 40,000 voter registration applications pending and is receiving absentee ballot requests at the rate of “about 500 a day.” Board Chairman Samuel Tillman called that “a good thing” because it would help alleviate lines at the polls on election day. Not sure how staff (there are only 15 or 16 full-timers) feels about that.

Hamilton also said the Board will begin mailing out absentee ballots on Sept. 18.

The Board rubber-stamped (4-0) a staff proposal setting up early voting for the Nov. 6 General Election, and it’s a slight improvement over the one for the primary.

All three will open for two Saturdays and one Sunday, thereby disappointing State Sen. Fran “The Man” Millar, who is not a big fan of Sunday voting, because, in his view, it brings uneducated voters to the polls. He’s spoken against it before and supported eliminating Sunday voting, but the plan failed. Tough luck, Fran! He faces tough competition this year in Democrat Sally Harrell, so he was just looking to cut himself a little bit of an edge.

The only improvement over the primary: Tucker Library and Stonecrest Library will open for voting Saturday, Oct. 27, and  Sunday, Oct. 28. The Tucker move might be a concession to the petition drive, collecting nearly 300 signatures, that called for opening Tucker Recreation Center for advanced Early Voting. Michael Coveny, the Board’s Independent member, had asked the staff to consider Tucker Rec, but by all appearances, that didn’t happen, and he was a no-show today. Lithonia remains under-served, though a little less so, perhaps in response to public criticism of the Board’s neglect of the area during the primary.

Staff kept its proposal under wraps despite repeated requests by the public to publish the proposal in advance (proposed sites weren’t even listed on the agenda). So there are some transparency issues with the Elections Board, which brings us to a second piece of business.

After early voting sites were approved, Chairman Tillman adjourned the Board to executive session to discuss “legal matters.”  There’s a problem with that: “Legal matters” are not a legal exception to Georgia’s Open Meetings Law. There is an “Attorney-Client” exception, but it’s specific–and involves an attorney. There was no such creature at today’s meeting. I called a point of order from the audience to challenge Tillman’s action, since this looked like an obvious violation of the law. Being a former reporter, this offended me on a procedural level. Tillman said something about the Board having an attorney, which has nothing to do with any of this, but he continued onward. None of the other Board members showed the slightest hesitation following him out of the room. So that happened.

State Board rules on a DeKalb election violation

I don’t know what “legal matters” the lawyerless crew discussed, but it turns out that the DeKalb Board had to appear before the State Elections Board at its Tuesday meeting and answer to some allegations. Details are scant, but a poll worker or workers did something in 2017 that wasn’t cool and it involved provisional ballots.

Update: AJC reporter Mark Niesse covered the State Board meeting and tells me the  DeKalb case involved a poll worker who allowed three voters to cast provisional ballots and sign them, but the precinct didn’t have envelopes to put the ballots in, and this created a confidentiality violation. Niesse said the poll worker folded over the ballots, but that wasn’t good enough to satisfy the law. So now the DeKalb Board knows it needs to have its precincts properly stocked when the polls open. Lesson learned! BTW, Mark is covering a lot of election news, and if you’ve read this far, you really should follow him on Twitter.

Tillman, who, to his credit is usually open and fairly talkative about issues, discussed the case, but not in any detail. He was proud that the case did not get referred to the Attorney General’s office for further action, but instead resulted in a less-severe Letter of Instruction. Tillman, who was present at the state meeting, had a lawyer with him then! He also praised  Hamilton (who used to work in the Secretary of State’s Office) for her diligence in dealing with the problem effectively, thereby avoiding further trouble.

Also interesting: Right after the DeKalb case, the State Board went into executive session. Watch, Chairman Tillman–this is how it’s done properly:

See? Is that so hard, DeKalb?