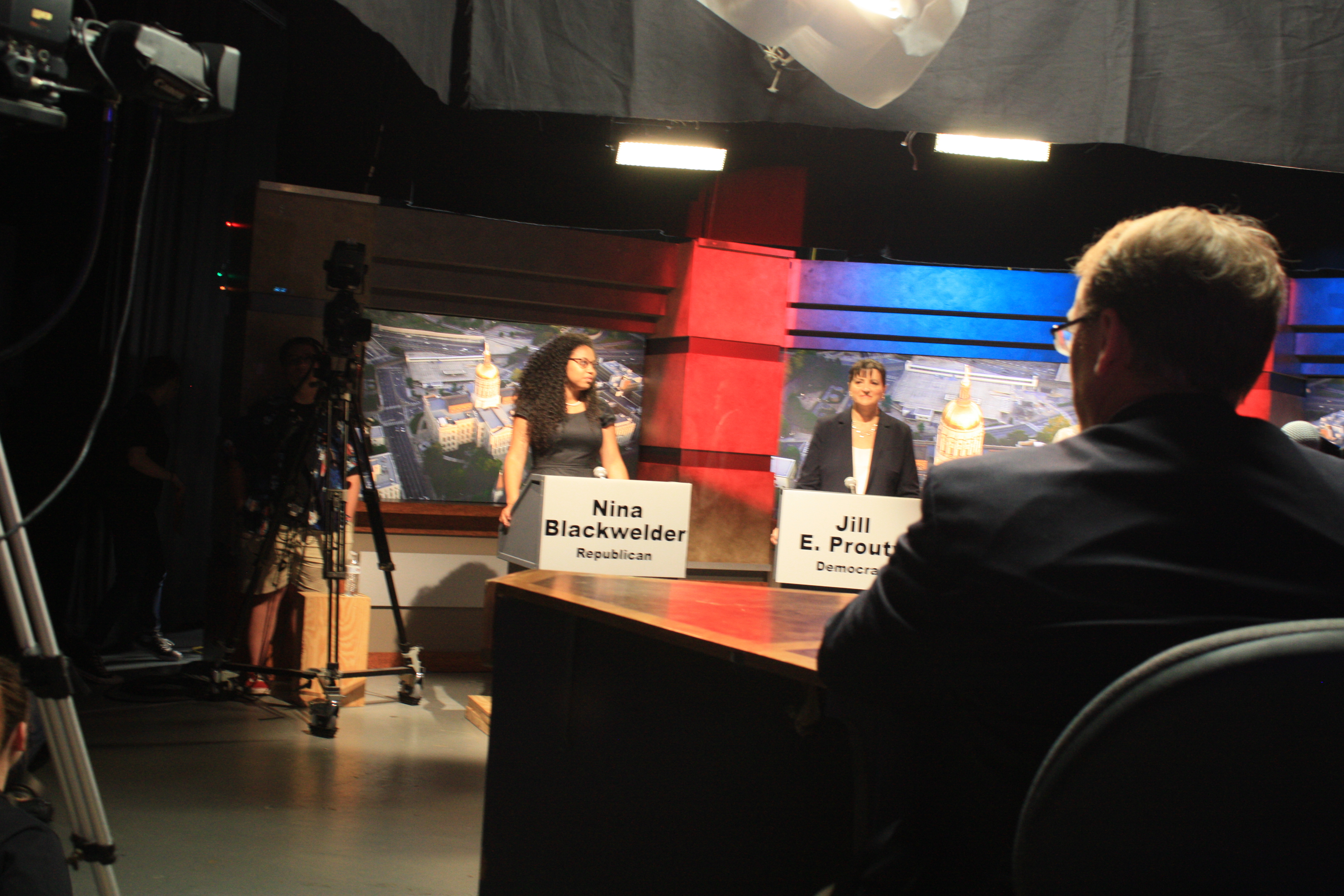 After State Rep. David Stover resigned in June, Republicans in Coweta and Fayette counties thought they still had Georgia’s House District 71 all to themselves. But then a moderate who was fed up with the Party of Trump plunked down her $400 and joined the race to replace Stover. Now her MAGA opponents all have to worry about coming in third in the Sept. 3 primary and missing an Oct. 1 runoff, since Jill Prouty’s upstart campaign is gaining steam.

The moderate Democrat offers a clear alternative to Republicans Nina Blackwelder, Philip Singleton, and Marcy Sakrison. Since there is little to no difference between the three GOP candidates on policy, they compete for the title of Trumpiest, and back whatever the president or Gov. Brian Kemp says.

“It’s a little alarming to me that we don’t want to engage in real thoughts and conversations,” Prouty said in a recent interview. “It’s all political talking points and how far they can push it to the right,” she added. “If you’re so shut down you’re not willing to consider new information, what kind of person are you?”

While the main GOP talking point these days involves labeling Democrats as “Socialist,” that label doesn’t apply to Prouty (or to the vast majority of Democrats, for that matter). Besides being Peachtree City’s longtime library director, the Coweta County resident is a business owner. She’s more of an enlightened capitalist. “You have to make money but you have to care about things, too,” she said. 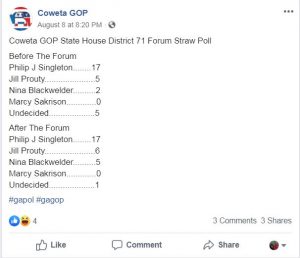 Having served at the library for two decades, Prouty has built strong connections in Peachtree City, and she said she’s picking up support from moderate Republicans who are fed up with right-wing rhetoric: “They’re tired of the constant rhetoric from on high—Trump’s rhetoric—with no one calling it out.”

Some anectodal evidence: Prouty came in second in a straw poll at a recent Coweta County GOP forum, even picking up a vote in the after-poll (see photo above, originally posted by Singleton).

What makes Jill tackle this hill?

Prouty says she was a lifelong Republican, but as a moderate, she became disaffected with the GOP and what she referred to as a shift away from the truth. “When Trump won the primary, that was the end for me.” Trump’s infamous taped conversation about sexually assaulting women was beyond the pale. “He said it was just locker-room talk, but any woman who’s been grabbed that way feels much differently.” 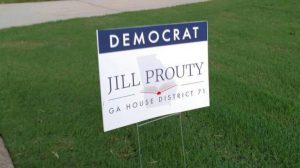 Becoming active in Democratic politics, she joined the newly formed Coweta Democratic Women’s Council and attended its first meeting in April. She had never run for office before, but began considering a legislative run after learning of Stover’s resignation. After mulling it over and gauging her support, she became the last candidate to qualify, making it a four-way race.

“I’m comfortable being the underdog,” she says. Indeed, she seems to be having fun, and laughed about running while she canvassed voters. “You kinda have to with all the big lots in the district.” she said. Right now, Prouty has to avoid the Peachtree City Library, an early voting site, so she’s been squirreled away in an office at City Hall, writing the library’s annual report.

Although it’s been reliably red in recent elections, well-educated districts like HD71 have been trending away from Republicans since Trump’s election, and voters might be surprised to learn that it’s the Democrat’s views on issues that are mainstream.

Healthcare is Prouty’s big issue. Unlike her opponents, she supports the expansion of Medicaid in the state, as do more than 70 percent of Georgians. The GOP-dominated General Assembly has balked at the idea, although this year, Gov. Kemp took a small step, seeking a Medicaid waiver. That’s hit a snag, however, so he may have to go back to the drawing board. 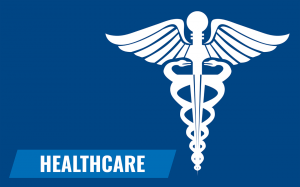 Prouty’s opponents have spoken in support of Kemp’s plan—out of party allegiance, no doubt, since it’s unlikely any of them would push for reform on their own. While Blackwelder favors “free market solutions,” here’s the inconvenient truth: The free market system for health isn’t working in rural Georgia. Hospitals are closing. People are dying. A full-fledged Medicaid expansion would provide healthcare to hundreds of thousands of Georgia’s poorer residents in a cost-effective manner.

As a part-owner of a Jersey Mike’s sub shop, Prouty has wrestled with the problems of getting insurance for her employees. She says this experience—and being the mother of a child with health problems—have strongly influenced her thinking. “Hospitals have to write off a lot of expenses when people come in and haven’t had preventive care for many years,” she notes. “It’s much cheaper for insurance to provide preventive care than to wait for a major hospitalization for something that could have been taken care of earlier.”

She opposes House Bill 481, Georgia’s six-week abortion ban passed in 2019 and now facing a court challenge. According to the CDC, abortion rates in the U.S. are at a historic low across all age groups. Jill believes banning abortion will not stop abortions, but will make the procedure more dangerous for women. Jill trusts women to make their own decisions, in consultation with their doctors, about their own bodies. Preserving reproductive freedom is important for all women.

“I’m not against gun ownership,” Prouty says. “But I want people to be educated about guns. They should know a family member is more likely to be shot than an intruder.” 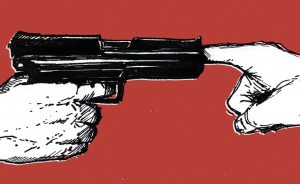 Prouty is the only candidate in the race that supporting common-sense gun legislation, such as universal background checks. A recent Marist poll found that 89% of Americans (and 84% of Republicans) approve of instituting background checks for sales at gun shows and other private sales. Even in the wake of mass shootings, all three Republicans in the race stand firmly with the gun lobby. “They are completely unwilling to confront the issue,” Prouty said. They don’t want to do anything.”

Climate change and the environment

Noting that the Environmental Protection Agency was founded under President Nixon, a Republican, Prouty said, “now we want to reverse environmental protections under Trump.” While some Republicans have started acknowledging the science of humankind’s effects on the climate, Prouty’s opponents are silent on the issue. Not Prouty: “We have to do something about climate change.” 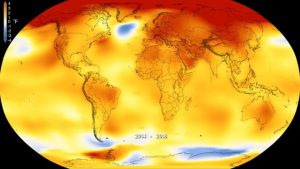 If all politics is local, so are environmental issues. “They’ve identified the importance of the environment in Coweta County’s community assessment—that people love its rural  character, the beautiful green space we have. I do, too. If we want to preserve what we love about Coweta County, we have to strike a balance. We shouldn’t abandon everything we’ve accomplished environmentally. I’m all for capitalism and development, but we have to protect the environment. I’ve become more concerned about this issue because of my kids and their concerns—and of course the scientific community. I’m all about knowledge, and I’d rather listen to scientists on this issue than Trump or Brian Kemp.” 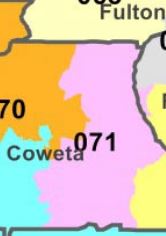 Georgia House District 71 covers part of eastern Coweta County and a slice of Peachtree City in Fayette. The special election to replace replace David Stover is Sept. 3, with an Oct. 1 runoff, if necessary.  Early voting is already under way. Click fort voting information in Coweta and Fayette. 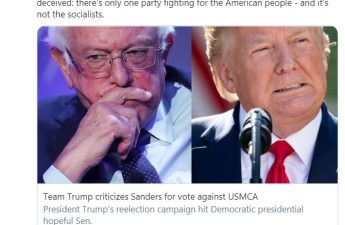 Georgia’s new Sen. Kelly Loeffler doesn’t know what she’s talking about, but that won’t stop her