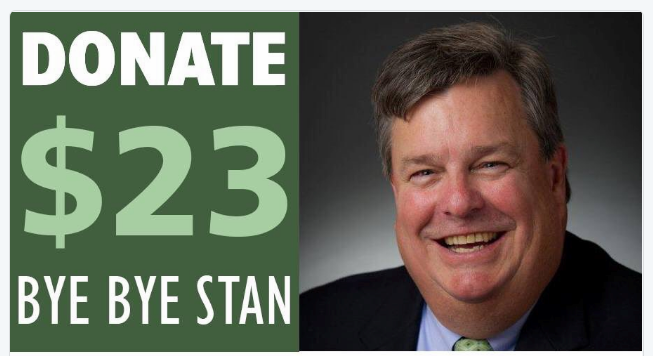 Over his 23 years in office, Public Service Commission Chairman Stan “Swamp Thing” Wise taught Georgians the Cobb County way by shoving Georgia Power’s Plant Vogtle Units 3 and 4 down the state’s throat. If you’ve been a Cobb EMC customer or noticed how the Braves stadium deal came to pass, you know what I’m talking about: A good old boy network colludes with corporate interests to screw the public. And while Cobb EMC’s former manager faces dozens of racketeering charges, consumers will never get their money back. And the same goes for Vogtle, which may or may not be completed.

Today was Wise’s last day on the job.  During his final meeting today, a colleague read from a Senate Resolution honoring Wise and, after regular business was concluded, the chairman said a few words. He extolled the PSC staff’s expertise and dedication, even though he willfully ignored their recommendations, which would have kept us out of this $25 billion-and-counting Vogtle mess, and then took some bland and blubbering shots at “hateful reporters” and the opposition, which he characterized as “extreme” and “strident.”

And in a perfect end note, a guy named “Bubba” (as in Lauren “Bubba” McDonald) was elected as the new chairman.

Wise has indicated that he plans to pursue a career with the utilities he has so loosely regulated—or, in the opinion of many—regulated him. Former Democratic State Rep. John Noel, who’s running for the PSC’s Post 3 seat, has taken a special interest in Wise (Post 5). When he heard last fall of Wise’s plan to vote to approve continued construction for Plant Vogtle, resign, and go work in the utility industry, Noel blasted Wise and said, he “should do us all a favor and resign immediately.”

Not long after that, Wise barred Noel from appearing as a public witness.

Not long after that, Noel went outlaw and testified anyway.

So, no love lost between those two.

Noel, who takes delight in pointing out how much Wise has been in the bag for the utilities (yes, there are receipts) is commemorating Wise’s departure with a parting message and a fundraising plea. Noel isn’t getting donations from utility interests (that’s what happens when you run a pro-solar, environmentalist campaign), so he’s asking people to donate $23, one dollar for each year of Wise’s reign of error. If you think ratepayers deserve a voice on the PSC, you might want to chip in.

Stan spent 23 years serving Georgia's largest utility. He voted almost every time in favor of the utility over ratepayers and voters. Time to return some Commissioners who care about Georgians. #gapol https://t.co/dDclMSmJCt pic.twitter.com/WRDdLcVvhk