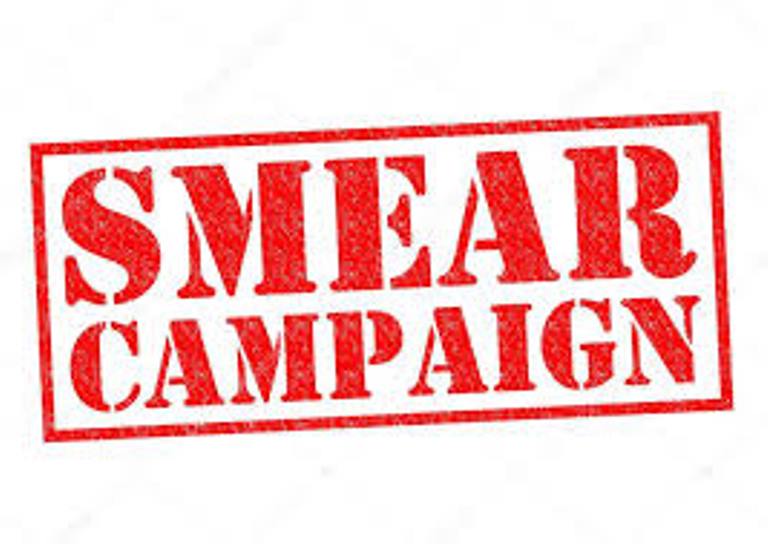 A Republican Party lawyer’s complaint against an attorney, who sued the GOP for libel and flipped a long-held state House Republican seat, has been dismissed by the state elections board.

The administrative complaint—one of three filed by GOP deputy counsel Vincent Russo against Atlanta attorney Josh McLaurin last year—served as the basis for incendiary political mailers circulated by the Republican Party in the run-up to the 2018 election.

Today, the Georgia Republican Party settled my libel case against it by promising never again to say I’m “under criminal investigation.” I am grateful to @EvansforGeorgia for helping me hold the GOP accountable for its lies. The truth still matters. https://t.co/IT1NnUaKR1

Story of a smear

(Original post published Oct 17, 2018 @ 21:32): The Georgia Republican Party, fearing the loss of House District 51 on Nov. 6, has decided that their guy needs all the help he can get, and unfortunately, that means going low. Consequently, Democratic candidate Josh McLaurin is getting slimed by state GOP mailers claiming he’s under criminal investigation.

Fact check: Josh McLaurin is NOT under criminal investigation.

Now, if your opponent actually was under criminal investigation, wouldn’t you want to talk about it? I know I would! But Alex Kaufman isn’t so talkative now that Republicans are getting pushback on their smear campaign. The Daily Report: Kaufman “wouldn’t talk to the Daily Report on the record or answer the majority of questions the newspaper submitted in writing at his request.”

McLaurin’s more than willing to talk about it. He’s also hired attorney Stacey Evans, late of the governor’s race, to handle a libel suit against the Republicans. The lawsuit was filed late last night.

While Kaufman doesn’t want to talk about the fliers, he was willing to regurgitate the accusations in an email, though he seems uncertain in parroting GOP claims to the Daily Report. Meanwhile, he crosses his fingers and hopes the mudslinging works, because he needs all the help he can get. But the libel suit complicates matters, doesn’t it?

McLaurin briefly ran in last year’s crowded Sixth District race before bowing out in favor of party favorite Jon Ossoff. Now, the energetic young lawyer has been campaigning in a North Fulton district that includes sections of Sandy Springs, Roswell, and John’s Creek. The seat had been safely Republican for many years, but the retirement of Rep. Wendell Willard, changing demographics, and the rise of Trump have made it flippable. Hillary Clinton beat Trump by six points in HD51’s thirteen precincts.

Republicans responded to McLaurin’s candidacy with a challenge to his eligibility by local GOP politico Gabriel Sterling, using the legal services of Vincent Russo, partner in a firm that mixes litigation and lobbying. Russo happens to be chief deputy general counsel of the state Republican Party and a lawyer for Secretary of State Brian Kemp’s gubernatorial campaign. If all that wasn’t swampish enough, Russo teamed up with Kemp’s former chief of staff and legal counsel to file the challenge, the Daily Report notes.

With only two candidates qualifying, winning the challenge would mean winning the seat outright. So, bring out the big guns! Since the case would be ultimately decided by Kemp, Kaufman had to feel lucky.

The challenge required McLaurin to prove he’d lived in Georgia two years and the district for one year as of Election Day in November. He turned to State Rep. Scott Holcomb to defend his right to run for office. Holcomb’s law firm took on the case pro bono–without a fee, for the public good.

The challenge was based on the fact that McLaurin, born and raised in Georgia, had lived in New York in 2016. Kaufman’s luck ran out when the evidence came in. McLaurin had moved back to Georgia in time to register to vote and cast a ballot in the 2016 election. That met the standard of proof for Georgia residency. Proof that he’d met the one-year requirement was established by an apartment lease. By the way, Sterling didn’t bother to show up for the hearing.

It was a slam dunk win for McLaurin. The administrative law judge in the case ruled definitively in his favor, and Republican Secretary of State Brian Kemp finalized the decision. McLaurin remained on the ballot and advanced to the general.

Anatomy of a smear

Instead of accepting their loss and disposing of it properly, Republicans polished it and repackaged it to the public as “a criminal investigation.”

First, Russo filed a complaint accusing McLaurin of “illegal access” to Georgia’s online voting registration system and “false swearing” while qualifying to run for office. McLaurin has explained why this is not the case and has testified on the issue. Russo’s contention was effectively shot down by Holcomb in his response to the complaint. There has been no action since. In other words, there is no case, civil or criminal, nor is there likely to be.

Secondly, the cash-rich Georgia Republican Party took Russo’s complaint and used it to claim in thousands of fliers that McLaurin is “under criminal investigation.”

McLaurin responded by retaining Evans. Noting that the fliers are “false and defamatory,” Evans wrote a letter to Georgia GOP Chairman John Watson to stop sending them out and to retract the allegations. Here’s an explanation, in legalese, from Evans:

The GOP didn’t stop, however. Another round of fliers has gone out.

Bottom line: This isn’t just a lie. It’s an inorganic, manufactured lie designed to do as much personal damage as possible.

There is another accusation in the fliers worth noting—and dismissing: the claim that McLaurin has failed to report “thousands of dollars in contributions.” This comes from a staged ethics complaint by longtime GOP donor, sometime candidate, and retired “government affairs specialist” Roger Wise, represented by Strickland, Brockington, Lewis, a firm with strong GOP ties that has donated more that $100,000 to Georgia Republicans in recent years.

Side note: Wise had his very own day at the Capitol in 2014. The Senate Resolution naming “Roger Wise Day” was introduced by six Republican state senators. He can probably get another day in his honor, sponsored by Kaufman, if this BS works.

In the ethics complaint, Republicans claim Holcomb’s defense of McLaurin’s right to appear on the ballot is an illegal campaign contribution because Holcomb’s firm took the case pro bono.

Here’s the thing: Pro bono services are exempt from campaigning reporting requirements. Not only that, but Bryan Tyson, Wise’s attorney, admits to the Daily Report that he doesn’t have facts to back up the complaint: “Tyson acknowledged that he doesn’t know whether Holcomb used firm resources or, if he did, to what extent he did so.” That is a seriously clueless response.

So, another nothing burger.

May the better candidate win: Instead of stepping up and doing the right thing, Kaufman has embraced the smear, although he’s unwilling to face questions about it. He should be ashamed of himself, but shame has been in short supply recently. And that’s another reason to vote for Josh McLaurin.

This mailer’s claim that I’m under “criminal investigation” is false, @AlexKaufmanHD51, and you know it. Your name is on the mailer—the state GOP is doing it for you. I demand you denounce this mail campaign. Run an honorable race, and don’t let this be your legacy. #gapol pic.twitter.com/Qjtj68yfyA