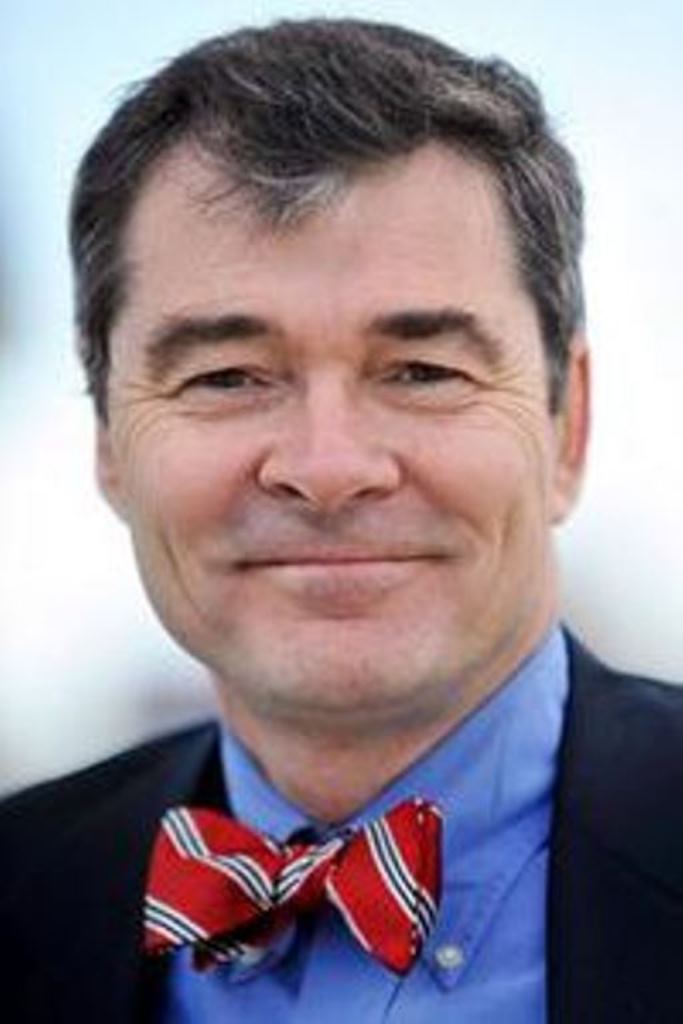 I looked up “Tool” in the Urban Dictionary. Echols fits every definition except “Kanye West” 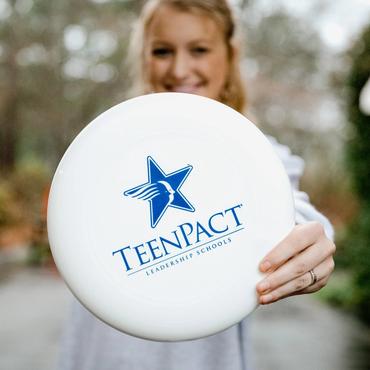 On the Georgia Public Service Commission, Tim Echols  functions largely as a cheerleader for Georgia Power Company and Plant Vogtle. Like every other PSC member—and all statewide officeholders—he’s a Republican. He’s also a proud pro-lifer, Trumpist evangelical, and founder of TeenPact, “a hands-on leadership experience for Christian students,” which gives out the Tim Echols Political Involvement Award and sells Frisbee discs for $12 at its online store. I think his goal is to build a next-gen army of Republican politicians.

To top off Georgia’s misfortune, he’s also active on social media and seems to be the most outspoken, loquacious, and insufferable commissioner, by far. I thought he was a tool even before he trolled Democratic PSC candidates’ town hall Tuesday night, but even more so now.

In late 2017, the Commission ignored its own staff’s evidence and voted unanimously to back Georgia Power’s plan to complete two additional units of the long-delayed and way-over-budget Vogtle nuclear power plant in Burke County. (It’s a bit of a mess, if you haven’t heard.)  At the time of the decision, Echols called Units 3 and 4 “our reactors,” signaling the Commission’s ownership of the project. By this time, of course, Echols and his colleagues were fully in bed with Georgia Power and had been asleep there for many years. However, he had it wrong: Vogtle owned him, not vice versa. Two years later, defending his decision to jack up Georgia Power rates, Echols said something equally insipid—and alarming: “High profits should help keep the company’s credit score from dipping, which ultimately would have hurt customers who are responsible for Georgia Power’s financial health.”

Republican socialism is the worst socialism.

More recently, Echols was the PSC’s front man to push for Plant Vogtle workers to be declared “essential employees” so that they wouldn’t be subject to quarantine restrictions. Here’s the PSC’s letter to Gov. Brian Kemp:


Spoiler alert: It’s not going well. Around the time of the letter, unsanitary conditions and practices were reported at the Vogtle worksite. Now, CNN reports that 42 workers there have tested positive for the coronavirus, our elected regulators having cheered them on. The latest: Georgia Power has cut its Vogtle workforce by 20%.

It’s reasonable to conclude that the PSC is really, really bad at its job. Part of that may be, as Democratic U.S. Senate candidate Teresa Tomlinson has pointed out, that they don’t like government. One of the great tragedies of Republican rule in Georgia and elsewhere has been the capture of regulatory agencies by the companies they are supposed to oversee. Restoring balance to the regulatory process means electing Democratic regulators. It’s as much a matter of simple logic as it is partisan politics. 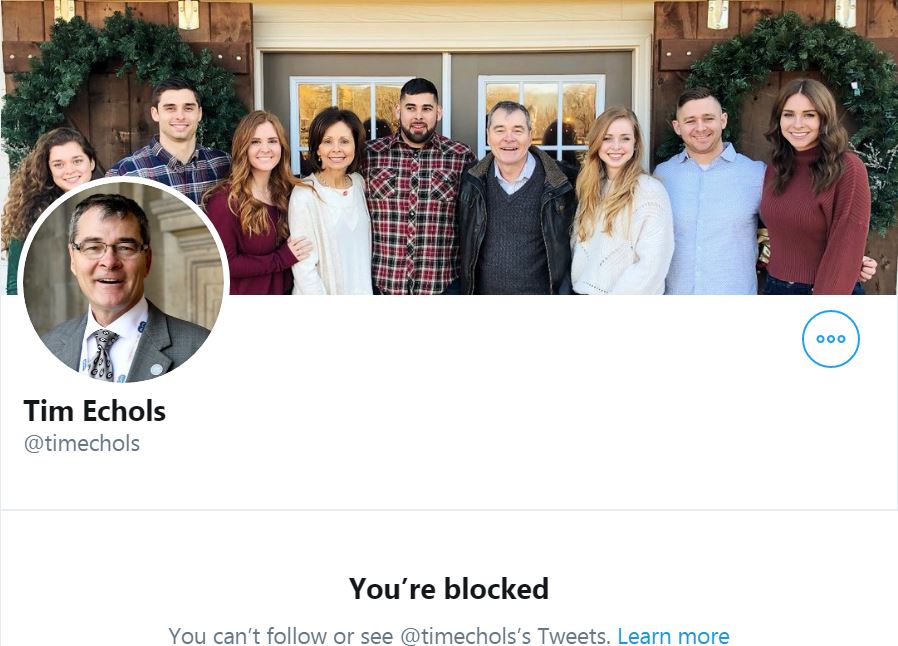 During the 1980s, I was the PSC spokesman. Since then, I’ve worked with and advised several PSC candidates, all Democrats. Most recently, I’ve been working with John Noel, an environmentalist, green energy advocate, and fiercely independent fellow. Get to know him! Now living in Augusta, Noel is running for a different PSC post (North Georgia) than he did in 2018, and as part of a team with Robert Bryant of Savannah, the Democratic nominee for the South Georgia post. (Despite the nomenclature, all PSC posts are elected statewide.)

It’s oddly appropriate that Noel is running against an incumbent named Bubba. By the way, Echols is up for re-election in 2022.

I also worked with Noel during his 2018 campaign, which ended in a primary loss to Lindy Miller. She lost a general election runoff, thanks in large part to a million dollars the nuclear industry pumped into the campaign to prop up pro-utility GOP incumbent (but I repeat myself) Chuck Eaton.

During the 2018 campaign, Echols and I crossed paths on social media, even though I largely ignored him. But it’s interesting how our “relationship” developed. He followed me three times on Twitter and unfollowed me twice (I didn’t follow him back). I had DM’d him on his first follow to let him know I’d noticed he was following me, which left the door open.

Time passed. During his third follow, Echols came through the door I’d left open, DM’ing to ask me to retweet something he’d written. I thought he was daft or ignorant, but especially needy. After all, anyone with any sense would know I was closely aligned with Noel. I ignored his request.

In early 2018, I tweeted out a link to an article about John:

Note: Vogtle was a hot issue in 2018, but the elections that year marked the last realistic chance to even attempt to put a stop to it, so far as the PSC was concerned. With the nuclear industry buying complete PSC complicity with that million dollars, the only thing to stop Vogtle now would be a disastrous failure by Georgia Power and/or abandonment of the project by its partners. Noel no longer advocates shutting down construction on Vogtle, but he’s stated that the PSC should hold Georgia Power accountable for its decisions, and he continues to advocate for clean energy sources. 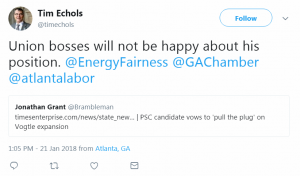 Someone should do something about this wild-eyed, crazy Democrat John Noel whose position aligns with … checks notes … the PSC staff.

Irritated by the trolling, I responded: 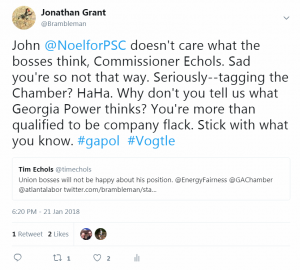 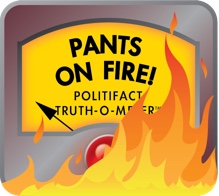 I was immediately blocked. Echols is a public official, and it’s considered bad form, at the very least, for such persons to block constituents on social media. He claims that he only does it when people use profanity. That’s a lie. (See below for more receipts.)

Anyway, so what. I figured he was just thin-skinned. Funny thing, though. Echols is an ambitious guy and one day he floated the idea of running for governor. (Spoiler alert: The PSC is not a stepping stone to higher office, although one commissioner I was fond of, Gary Andrews, went on to serve many years as a justice on the Georgia Court of Appeals. Sadly, he died last week. Rest in Peace, Judge.)  AJC reporter Greg Bluestein tweeted out a blurb about it. I couldn’t read Echol’s tweet, being blocked, but everyone who replied to the tweet had been blocked by Echols. LOL. Like I said, thin-skinned. 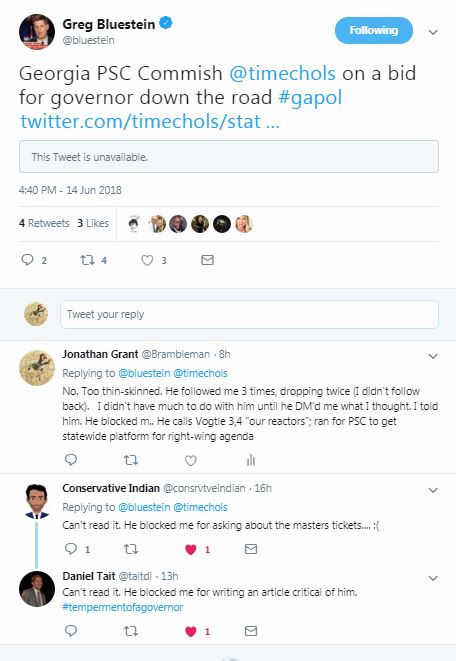 It happens that Echols has a radio show called Energy Matters on WGAU Radio in Athens, apparently sponsored by Gas South. (Yeah, I know.) Funny thing, while Echols blocked me, at one point his radio show’s Twitter account followed me. You know how some people are.

Not long after the 2018 election, Noel started appearing on the show in some kind of strange bedfellows, Point-Counterpoint thing. Noel ended that relationship several months before he launched his 2020 campaign. I should note that Noel considers Echols a friend. For the record, John is a friendly guy. 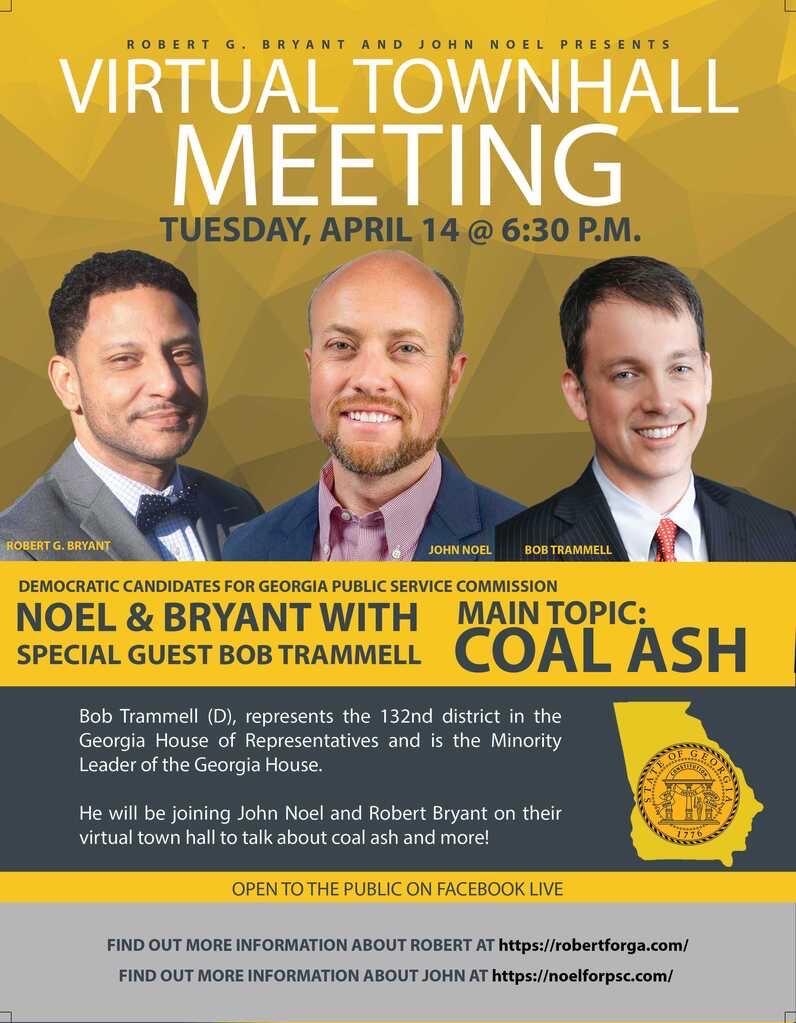 I worked with Noel and Bryant to promote their virtual town hall meeting on coal ash Tuesday evening. The storage and disposal of this ash and its toxic effect on our water supplies are important issues, so I’m glad they’re giving it the attention it deserves. More specifically, the town hall focused on problems around Plant Scherer in Monroe County. Their special guest was Georgia House Minority Leader Bob Trammell (D-Luthersville) whose leadership on the issue has been exemplary, but futile, since Republicans have blocked meaningful action on the issue. You can watch the town hall here.

There was a decent-sized audience–actually quite large for a PSC campaign event—with a lot of public interaction. Echols made himself at home in the comment section, apparently believing being a commissioner, or knowing Noel, gave him the right to take a whiz in the Democrats’ tent. So he wasn’t watching and listening politely; instead, he was chewing up the scenery and sucking up oxygen, throwing in a defense of Georgia Power along the way. He really tried to pull an alpha on the crowd. Screenshots of his comments and replies fill a seven-page document. It was a tacky, self-aggrandizing performance, and a shabby way to treat a friend.

I don’t think Echols revealed his identity directly; he may have assumed everybody knew him, although the odds of people knowing a commissioner’s name are pretty low. When Noel pointed out that there was a PSC member in the audience, I said something about it:

Others were offended as well. His response begged the question of what was he was doing there in the first place. Seriously, if you’re going to spy for Bubba and Georgia Power, have the decency to do it quietly. I responded: “John is much more gracious than you are.”

And then Echols sent me a friend request on Facebook. LOL.

This is the most telling thing of all: After people knew Echols’ identity, he was asked if he would meet with people affected by coal ash. He didn’t respond to their request on Facebook during the event. I checked back with one of the people involved. Nada. Echols ghosted on that request.

All in all, a reprehensible performance. By a complete tool.

Did I mention Echols is up for re-election in 2022?