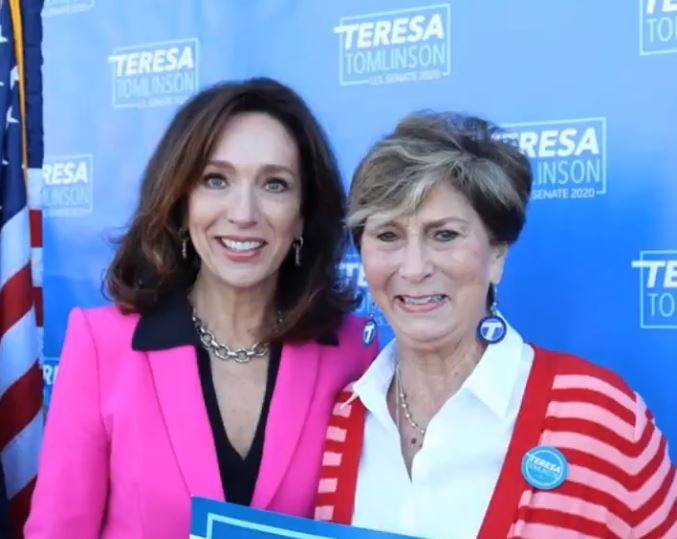 Teresa Tomlinson loves her mama and sent out a Mother’s Day video to celebrate that fact. She invokes Dianne Pike’s hardscrabble roots and climb up from South Georgia poverty as essential to her own success as an attorney, mayor of Columbus, and U.S. Senate candidate. In fact, Tomlinson’s campaign is a family affair: Her mother makes frequent appearances at campaign events and sister Tonya oversees the yard sign operations and rallies to her cause on social media, among other things. For  more on her campaign to “Send Perdue Packing,” click here.

Teresa Tomlinson doesn’t have children of her own. That became an issue during an odd moment during last Sunday’s Senate debate when another candidate pointed that out, inferring that this was somehow a detriment to Tomlinson’s candidacy in a “You don’t know what it’s like” kind of way. 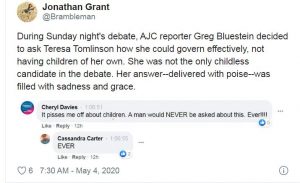 For me, it was an eyebrow-raising moment. After that,  moderator and AJC Reporter Greg Bluestein followed up, asking Tomlinson to address the issue of how she could effectively govern without having children of her own. Perhaps he simply wanted to give her an opportunity to respond to what sounded like an attack. But since Tomlinson wasn’t the only childless candidate, my other eyebrow went up.

Teresa’s response was worth noting. I tweeted about it, including comments on the livestream expressing anger at what people saw as unfair treatment of a female candidate: “During Sunday night’s debate, AJC reporter Greg Bluestein decided to ask Teresa Tomlinson how she could govern effectively, not having children of her own. She was not the only childless candidate in the debate. Her answer–delivered with poise–was filled with sadness and grace.”

Side note: Tomlinson did well in the debate, answering opponents’ pointed questions knowledgeably and steering the discussion to her successful record and progressive policies. A couple of times, she schooled Jon Ossoff, who tends to avoid answering direct questions. The fact that she was attacked so often by other candidates indicates she’s seen as a front-runner in the race. (The likely outcome of the June 9 primary is a runoff between Tomlinson and Jon Ossoff). You can watch the debate here. And if you check out the comments, you’ll see her performance received the best reviews.

This morning, Tomlinson sent out an email dealing with that issue.I get inundated with campaign emails, but this one was different. It’s worth sharing.

Last Mother’s Day I shared how for 10 years my mother struggled with infertility, as I have, and how fortunate we both were to have control over our reproductive health — a freedom to which every person is entitled.

The subject of motherhood was brought up in last Sunday’s Georgia Public Broadcasting and Atlanta Press Club debate, with a claim directed at me that without firsthand experience raising children, I lacked the capacity for compassion and nurturing that is needed in government.

When Trip and I came to realize that we were not going to have children, I made the decision to enter public service. If I could not raise children of my own, I was going to dedicate myself to making sure that everyone else’s children had the institutional support needed to grow up in hopeful, nourishing environments.

How we raise our children as a society, and how we choose to invest in the future through government policy, both have to do with the kind of legacy we want to leave for the next generation. Right now it is obvious that we have to do better.

I submit to you my record. Public service and governing well is how I have endeavored to leave a legacy, much in the way those who are fortunate enough to conceive do with raising their kids. I have led a city, saved a public pension, and reformed a public healthcare system. I know in my bones that I can defeat David Perdue, who has allowed Donald Trump to wreak havoc on our country and make us less safe.

I believe in each and every one of you. Together we are going to do what it takes to win this election and deliver our children the kind of country they will be proud to inherit.

To all of the mothers out there, I wish you a sincerely happy Mother’s Day. To those missing their moms, particularly the mothers we have lost in this ongoing pandemic, I hope you can find peace in cherished memories. Let us move all forward together and each leave a legacy to be proud of.

Disclosure: I endorse Dianne Pike, too