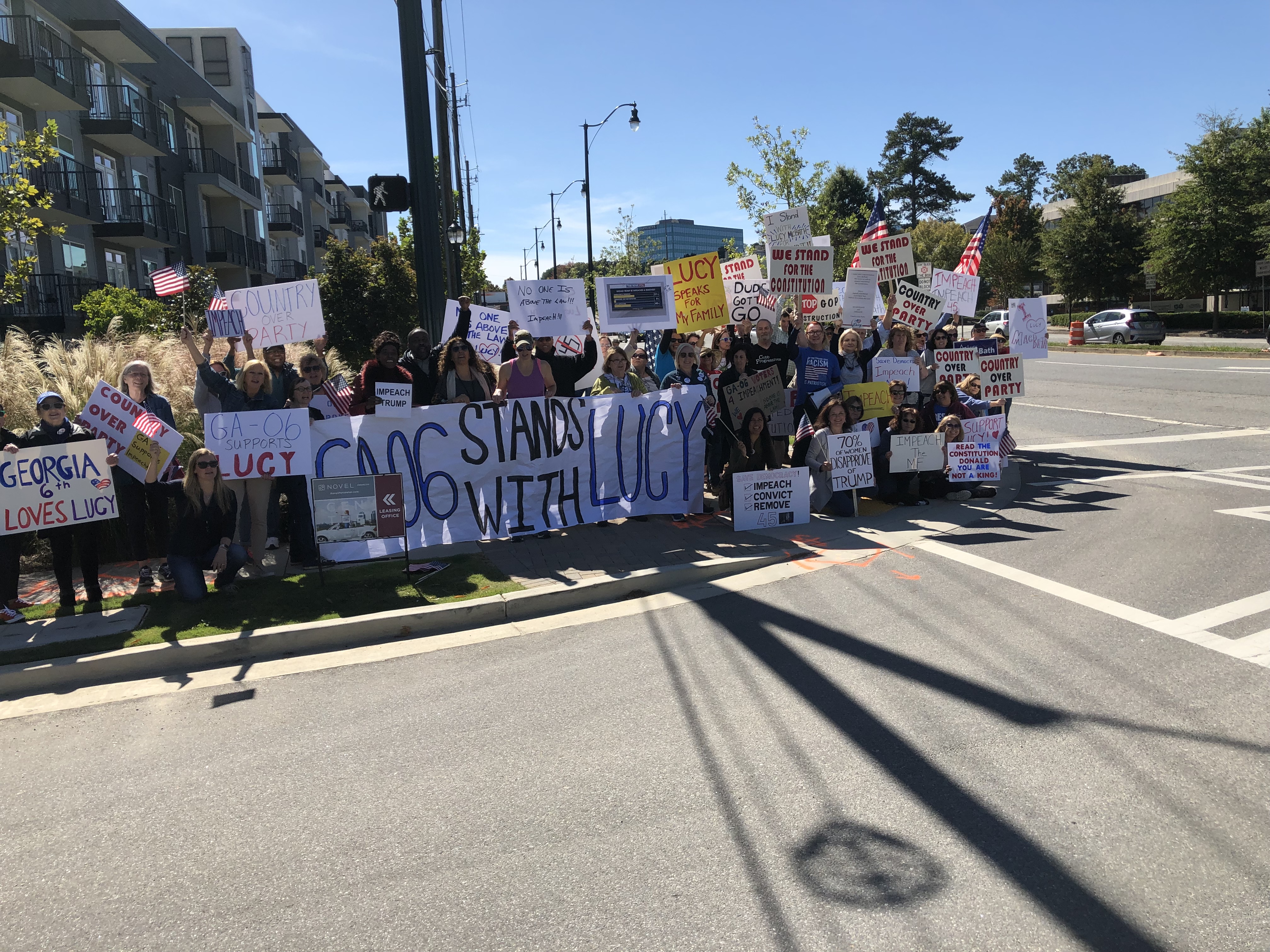 From The Daily Beast:

A couple hundred Donald Trump fans rallied outside Congress on Thursday for the “March for Trump,” an event meant to oppose House Democrats’ impeachment investigation. According to organizers, though, there would have been hundreds more people shouting “stop the coup” in Washington’s streets if not for a liberal plot against their buses.

That’s because, as would-be rally attendees gathered across the East Coast for the US Coachways buses that the organizer had promised would take them to Washington, those buses never showed.

The no-shows provoked a wave of anger, accusations that the “deep state” had colluded to stop a show of Trump support in Washington, and negative reviews aimed at US Coachways.

But US Coachways has a simpler explanation for what happened—it was never paid for the requested buses due to a series of declined credit card payments.

“We want to get people down there,” Joseph Heap, US Coachways’ chief marketing officer, told The Daily Beast. “But unfortunately, payment is required.”

Meanwhile, back in Sandy Springs

Several dozen people with signs lined Glenridge Drive on both sides of the driveway leading to Sixth District Rep. Lucy McBath’s Sandy Springs office Thursday at noon. With a honk, but not paying attention to the signs, I pulled into the lot, and walked up to join the crowd, only to stumble into the Trump camp. 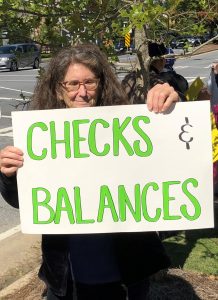 Which surprised me, because I had hoped Lucy’s supporters would have the sidewalk to themselves. Atlanta’s MAGA folks–Women for Trump–were supposed to hop on a bus at the Norcross Cracker Barrel for a trip to Washington D.C. to attend the “Women for Trump” march. But no. Apparently, the bus trip had been canceled. For non-payment. (The D.C. event played out today, albeit in diminished form.)

The Trump folks have been protesting Democrats’ House impeachment inquiry (“Stop the Madness”) and McBath’s support for the investigation, even though Trump’s high crimes and misdemeanors keep piling up—along with daily reminders that invoking the 25th Amendment wouldn’t be a bad idea. For example: Trump’s letter to the Turkish president, written on a 3rd-grade level. 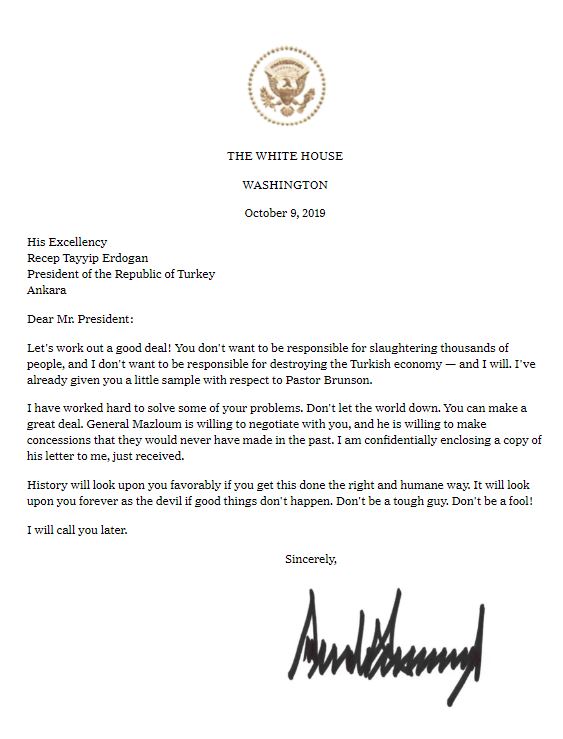 In which I irritate the Trumpers

Having revealed myself as a Lucy supporter, I was treated to the thought of the day: “Lucy McBath lives in Tennessee.” Nice try! But that out-of-district thing worked better with Jon Ossoff. Just gotta say this claim is frequently made by Republicans, even though the issue blew up in their faces when GOP operatives pulled a stunt  in a failed attempt to prove it. (Learn to read cursive!) Anyway, someone didn’t take my presence well. I retreated to the Lucy side—where an older lady called me out as a Trump supporter. Politics!

Last week, the MAGA crowd was about 100 strong, outnumbering Lucy supporters. This time, the numbers were about even, between 50 and 60 for each side. The messaging at rallies is simple—Pro vs. anti-impeachment, MAGA vs. We Love Lucy—carried out through signs and chants, punctuated by whistle blowing (especially significant these days). I’m glad to report the rallies were peaceful, with no incidents between the rival gangs, although I irritated some Trump supporters when I went back over to their side of the driveway for a head count. I’m a blogger. Get used to it, as Mick Mulvaney would say.

While people in Sandy Springs waved signs, Mulvaney, President Trump’s chief of staff, held a press briefing where he admitted the White House held up military aid to Ukraine in a quid pro quo for an investigation of Democrats. He also announced the latest grift: the U.S. will be hosting next year’s G7 Conference at Trump’s Doral resort—an amped-up violations of the emoluments clause of the Constitution, which, as one sign waver pointed out, Trump still hasn’t read.

Another sign noted that more than half of Americans support impeachment and removal of Trump from office. It’s ticked up a notch in the latest Gallup poll, to 52 percent. And that’s before people learned that under Trump’s leadership, the U.S. military is now bombing our own bases. The hits keep coming!

When the Trump rally broke up, McBath’s supporters sang the “Goodbye song,” and soon they were gone, too. Rally organizer Elizabeth Snow-Murphy of the 6th District Task Force said there will be another Stand with Lucy event next Thursday, Oct. 24, at 11:30 a.m.

Will hard-core Trump supporters show up again, after another week of revelations? Probably. They quit caring about his ignorance and wrongdoing, and many of them support him because he hates the same things they do. And since that’s the case, nothing matters. 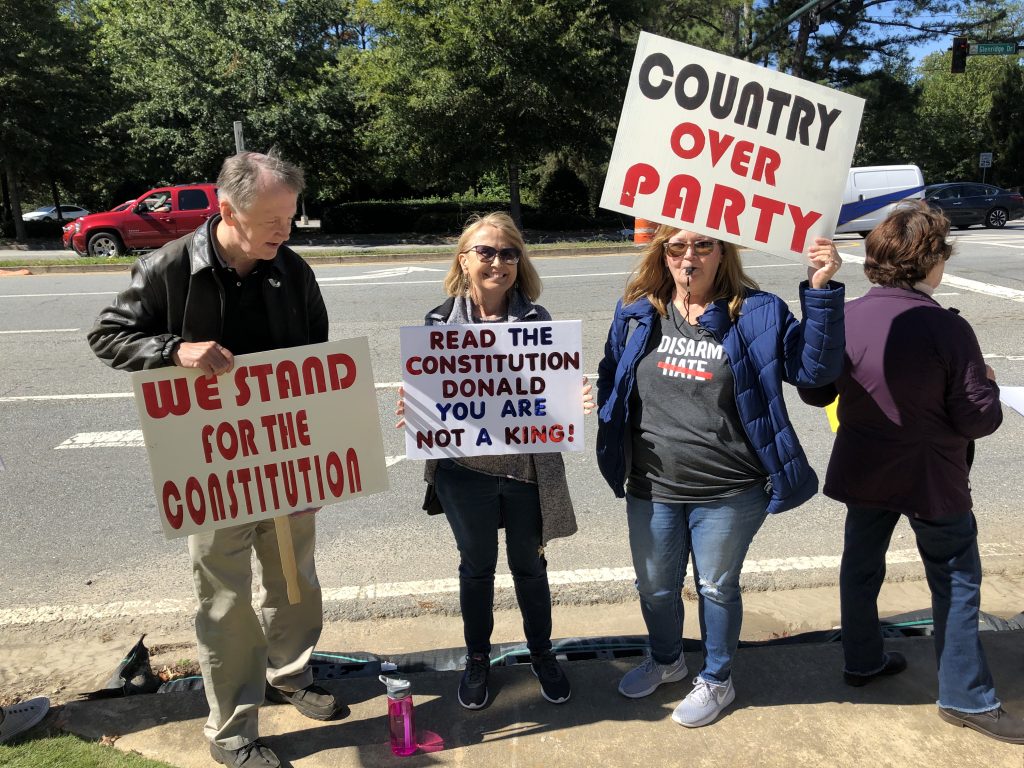 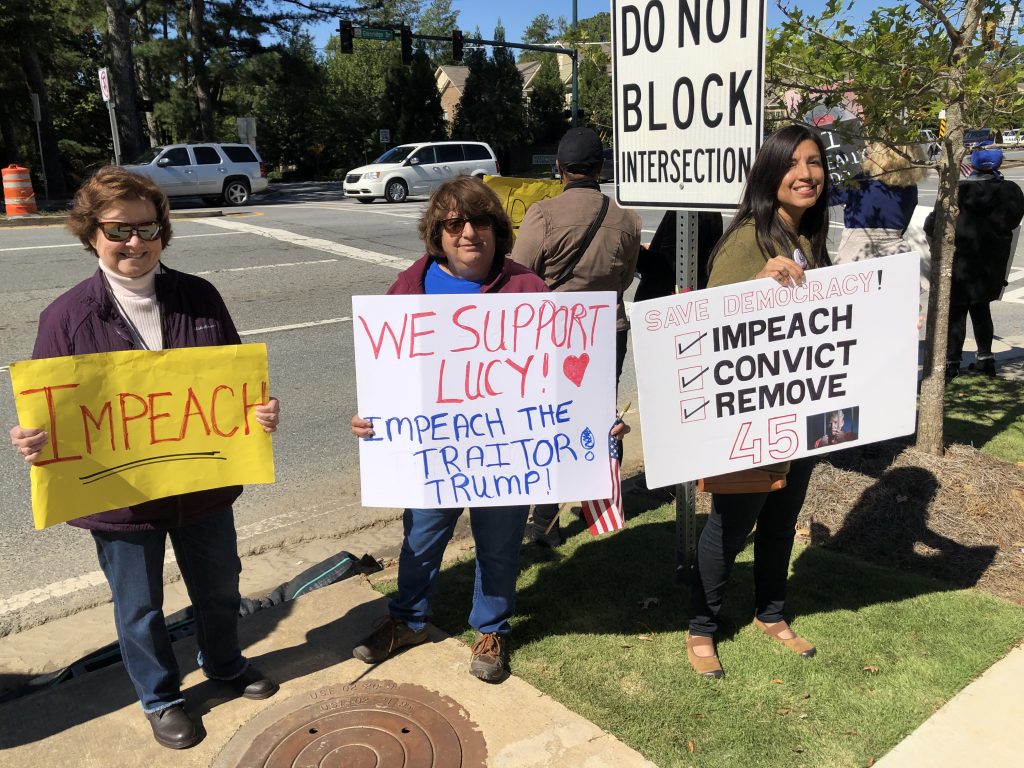