Unfortunately, Public Service Commission races are receiving absolutely no coverage in the media. Nevertheless, voters are receiving absentee ballots and researching races. I noticed that many people are Googling this article, so I’m reposting.

Monday, May 4: There will be a debate between John Noel and his primary opponent, Daniel Blackman, on Monday, May 4, at 10:00 a.m. You can watch online live or on demand via Facebook at www.fb.com/TheAtlantaPressClub and GPB.org.

Tuesday, May 5 from 6:30 to 7;30 p.m. on Facebook Live: John Noel/Robert Bryant Town Hall: Energy Equity and the Environment with Karenna Gore. Link to Event

Karenna Gore is a best-selling author and Director of the Center for Earth Ethics at Union Theological Seminary.  She will talk with Democratic PSC candidates John Noel and Robert Bryant about how Georgia’s energy policy relates to Environmental Justice, Climate Change, and why this should be looked at as a Moral and Ethical Issue.  Karenna. daughter of former Vice President Al Gore, will share insights about the Center’s initiatives, her own experiences, and how we might improve the environmental and ethical “climate” of Georgia. 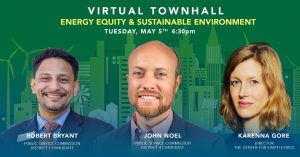 In addition to the Presidential election and two senatorial campaigns, Georgia has two Public Service Commission seats on statewide ballots this year. Here are a few of the issues we face: Plant Vogtle’s skyrocketing costs, green energy, coal ash, and energy equity. Not to mention the price we pay for utilities. So let’s not forget about them.

I love Georgians. The grit. The energy. The determination to make the best even better. That's why I'm running for PSC; to give a voice to those determined to make it better. https://t.co/7fQ2BVtb6u

Disclosure: This is my guy

John, now living in Augusta, is running for the North Georgia PSC seat. The districts, with their residence requirements, were created a generation ago as an homage and throwback to the old county-unit days. Anyway, it’s a statewide race and a contested primary. And I still haven’t seen one word about it in the AJC or any specific coverage of the race in any media. So please spread the word: John is a walk-the-walk environmentalist and consumer’s best friend. Did you know the PSC set Georgia Power’s allowed rate of return above the industry average? John would move to lower that. Want to know more? Visit his website or Facebook Page.

And check out this Youtube some indy journalists did about him.

A few weeks ago, Noel attended an “Emergency” Georgia State Election Board meeting, prepared to give a statement backing the Athens-Clarke County Board of Election’s decision to scrap the state’s Jumbotron ballot-marking screens and go with hand-marked paper ballots. He was not allowed to give it. The Board didn’t want to hear from voters. I wrote about the debacle. You can view my post here.

As I mentioned, there are two PSC seats at stake this year. Noel is running against Daniel Blackman in the Democratic Primary for the North Georgia seat. The winner will face GOP incumbent Bubba–that’s right, Bubba–McDonald in November. Noel is conducting a joint campaign with Robert Bryant of Savannah. Bryant is the lone Democrat to qualify for the South Georgia seat. He will face Jason Shaw, who was appointed to the PSC by Nathan Deal. Shaw quickly showed his loyalties by voting to raise Georgians’ electric rates and allow Georgia Power a higher than average rate of return. Bryant, like Noel, is pro-consumer, so the choice is pretty clear, especially since all PSC members are Republicans. They quit doing their jobs years ago, with some help from the GOP-dominated General Assembly.

Read Prologue and Chapter One of Brambleman, the Forsyth County saga