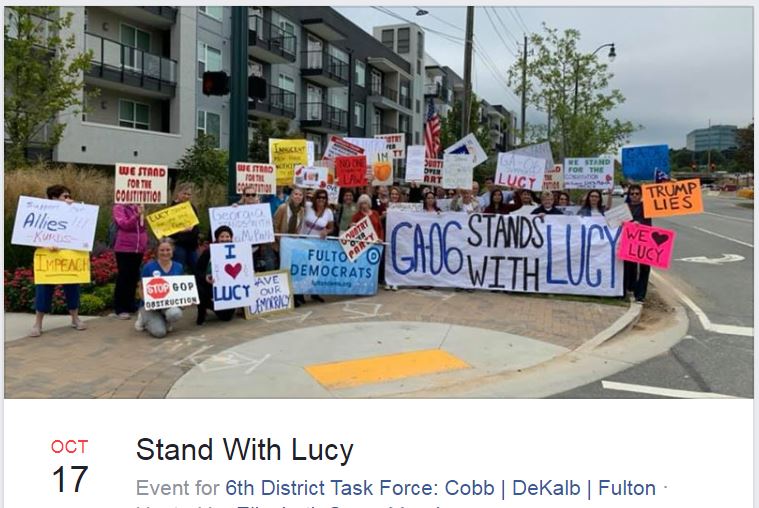 Update: I irritate some Trumpers during the rally face-off

About 100 Pro-Trump protesters showed up last week at Rep. Lucy McBath’s district office to call for the end of the impeachment inquiry. The MAGA crowd is angry at McBath for voting to move the the process along. She’s said she’ll make a decision based on the evidence.

Meanwhile, evidence of the president’s corruption piles up, with more testimony coming this week that President Trump’s aides see as “problematic.”  There will be more evidence, with or without obstruction. Then again, obstruction is evidence.

McBath supporters, 60 of whom showed up to counter-protest last week, will be back this Thursday, Oct. 17, for a repeat performance at 11;30 a.m. outside McBath’s Sandy Springs office, 5775 Glenridge Drive.

The GOP isn’t finished. They have targeted lucy again next week for their anti-impeachment message to try and protect this corrupt president.

The 6th District Task Force and Indivisible Georgia 6th District have partnered to make sure this is met with a resounding answer.

They’re looking for a crowd at the rally, so come if you can. RSVP here.

Meanwhile, Trumpers are hopping on buses to travel to Washington D.C. for a Thursday protest against impeachment. The Atlanta bus is leaving from a Cracker Barrel parking lot because of course it is. No other details available!

Tide is turning against Trump 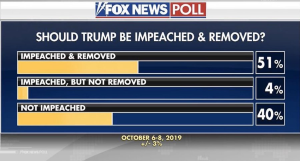 Trump’s numbers are likely to sink, and impeachment support likely to rise. Trump’s betrayal of our Kurdish allies has received a huge backlash, even among Republicans and evangelicals. It’s also drawn attention to his conflicts of interest with Turkey. I’m sure Rep. Adam Schiff would like to know more about the phone call Trump had with Turkish President Recep Tayyip Erdogan that led to the slaughter. And what else is out there, now that we know his personal attorney is under investigation? All this has a cumulative effect:

Each and every day. https://t.co/Tjnt3BcTJ1

While the GOP has been targeting McBath for defeat in 2020, there’s some interesting news  in this morning’s AJC Jolt column, headlined: “In an anti-impeachment campaign, Lucy McBath isn’t a first-tier priority.”  The article notes Republican plans to target vulnerable Democratic incumbents with TV ads, but McBath–who beat Karen Handel by one point last year–isn’t on the list. It’s “a subtle admission that Georgia’s Sixth District may be harder to influence than many Republicans think–and so may also be harder to recapture in 2020.”

The article points out some reasons why:

Over the last several years, age and education have emerged two of the most important demographic features of U.S. politics. In many communities, voters under 50 are skewing hard toward Democrats, as are college-educated voters.

So we spent this morning tracking down some U.S. Census Bureau stats on the three selected targets:

Compare those three to Georgia’s Sixth District. In McBath’s territory, the young population may be something of a factor – only 25.5% are older than 54.

But it is education that is the eyebrow-raiser. In 2017, the Sixth District was judged to have the sixth-highest level of education in the country. According to2018 U.S. Census estimates, 63.5% have a bachelor’s degree or better. And that’s an audience more likely to resist gut-level appeals on television.

Side note: If you want to keep up on Trump Impeachment stuff, one of the best people to follow on Twitter is George Conway a conservative lawyer and husband of top Trump aide Kellyanne Conway. (See tweet above.) He’s turned hard against Trumpm and he’s quite good at the tweeting. He also wrote a massive essay detailing why Trump is unfit for office. If you don’t know why, give it a read!