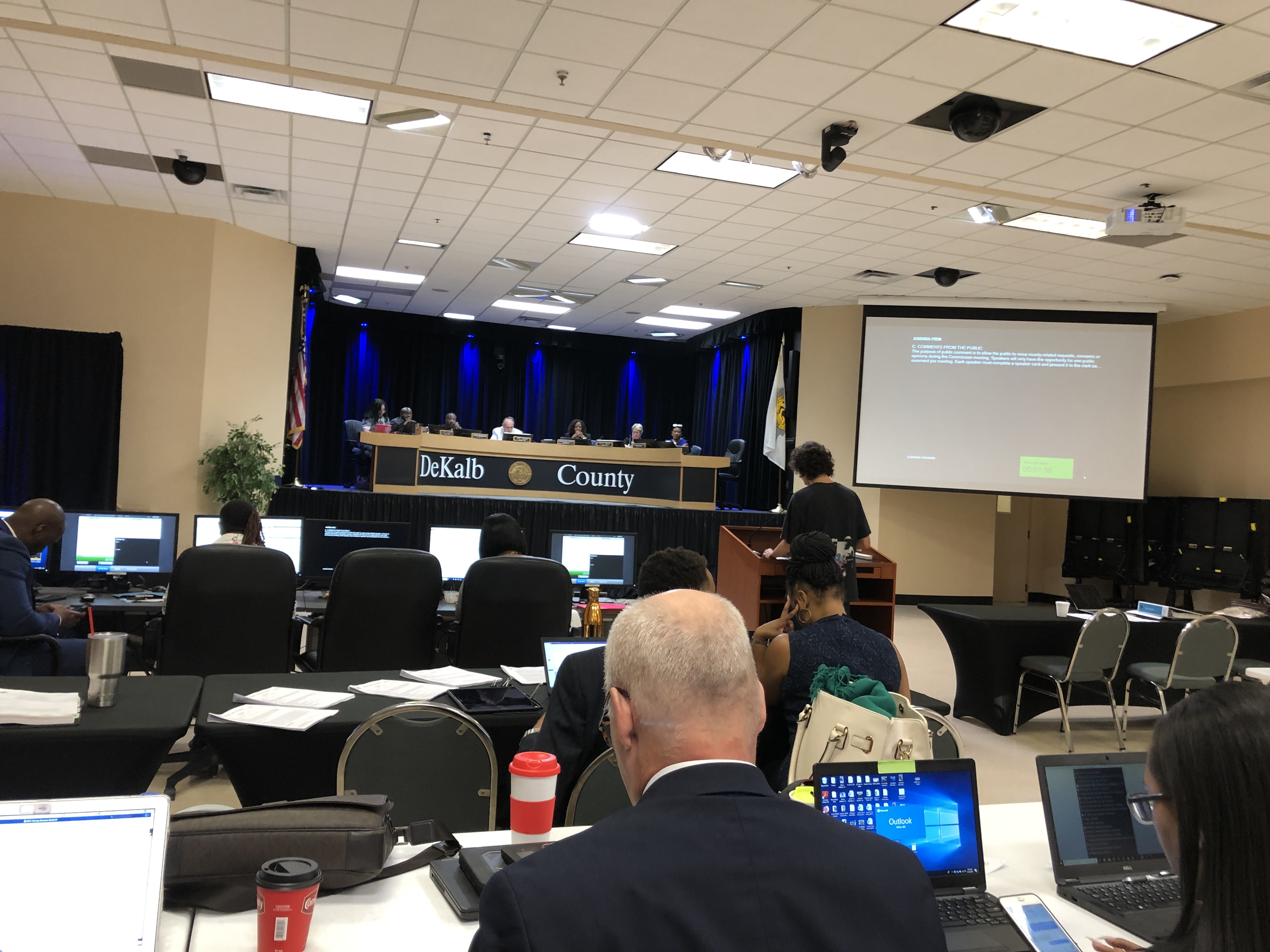 The DeKalb Board of Elections has more than its share of problems and several voting rights activists and grassroots volunteers spoke out about those issues and suppport for an ongoing audit at today’s DeKalb Board of Commissioners meeting. Liz Throop, Betsy Schwalbach, and others outlined many of the problems DeKalb voters faced last November: long lines, inadequate facilities for early voting, and problems with absentee ballots highlighted their list of concerns.

This included 4,700 missing absentee ballots in DeKalb that remain a matter of dispute and investigation (supposedly) by the Secretary of State’s office. As a result of this and other issues, thousands of DeKalb Citizens were unable to vote in the general election. Worth noting: DeKalb had less than 8 percent of Georgia voters—and about 15 percent of the problems reported to the Voter Protection Hotline during the 2018 elections.

Reacting to widespread public concerns, DeKalb Commissioners were concerned enough about the anomalies that they authorized an audit of the elections board. But the audit has hit a snag because access to the the state registration system has been denied to the county-authorized auditors because, quoting from the minutes of the July Board of Elections meeting: “neither state or federal law allows access to ‘the public’.”

In all, people spoke for nearly fifteen minutes about election issues; I’ve spliced together their comments in full. They’re worth a listen.

I also spoke. I’m a process guy, so I focused on the Elections Board’s structure, some procedural shortcomings, and the new method of selecting members, which leaves much to be desired (more on that later). I also gave commissioners a copy of my letter to Judge Asha Jackson about the selection process. (I’m not holding my breath for a response.)  In any case, here’s the write-up of what I had to say.

My remarks to commissioners

I was here a few months ago, one of several DeKalb citizens urging the Commission to authorize an audit of the Board of Elections. While the audit was approved–thank you for that!–there are now concerns about what will come of it, since access to information is being blocked.

I will say that, after observing the Board of Elections for more than two years, that board operations and decision-making are not what I would call transparent. One example: I have never observed a discussion or vote of budgetary matters or funding for improvements, other than repainting and cosmetic changes.

This is an inward-facing department—often defensive in its dealings with the public. It’s also stuck in the past. Board members do not even have county-issued email accounts, at least not that they’re willing to disclose to citizens. As a result of these and other issues, it has a severe an unnecessarily harsh image problem.

Interesting fact: In the 2018 general election, DeKalb had less than 8 percent of voters in Georgia—and about 15 percent of the problems reported to the Voter Protection Hotline.

The Board’s image wasn’t helped by the new selection process for Board members, which was changed under state law this year–a “self fix” engineered and ramrodded by Board Chairman Samuel Tillman. It was intended to deal with the same issue the ethics board faced regarding members not chosen by elected officials.

Prior law required Democratic and Republican parties to each choose two Board of Elections members; those four members would pick the fifth, nonpartisan member. Under the new law, the two parties each nominate two members, and the chief judge of Superior Court ratifies those choices, then picks the fifth member.

This year, the Democratic Party nominated two new members–from more than a dozen applicants–and Republicans stuck with the currently serving members. Although Mr. Tillman applied for a Democratic position, his application, as well as that of Board member Leona Perry, was passed over in favor of “new blood.”

A day after Party nominees were appointed by Judge Asha Jackson, she appointed Mr. Tillman as the fifth member. He is, of course, by no means non-partisan, but oddly, there is no requirement that the fifth “at large” member be non-partisan. Interestingly, strange bedfellows have resulted.

I called Judge Jackson’s office and wrote a letter asking about the selection process. I have not received a response, nor do I expect one. I’ve attached a copy of the letter for your information

The new process is flawed. The fifth board member should be an independent voter, if such a thing still exists. Also, the opportunity to serve in the at-large position should be advertised and filled openly, not handled in an off-the-record manner. In fact, it would be better if this commission ratified the nominations and chose the fifth member, since commissioners as a whole have a much broader knowledge of the DeKalb community.

There should also be term limits. I’m certain that a thorough audit would provide ample evidence why.