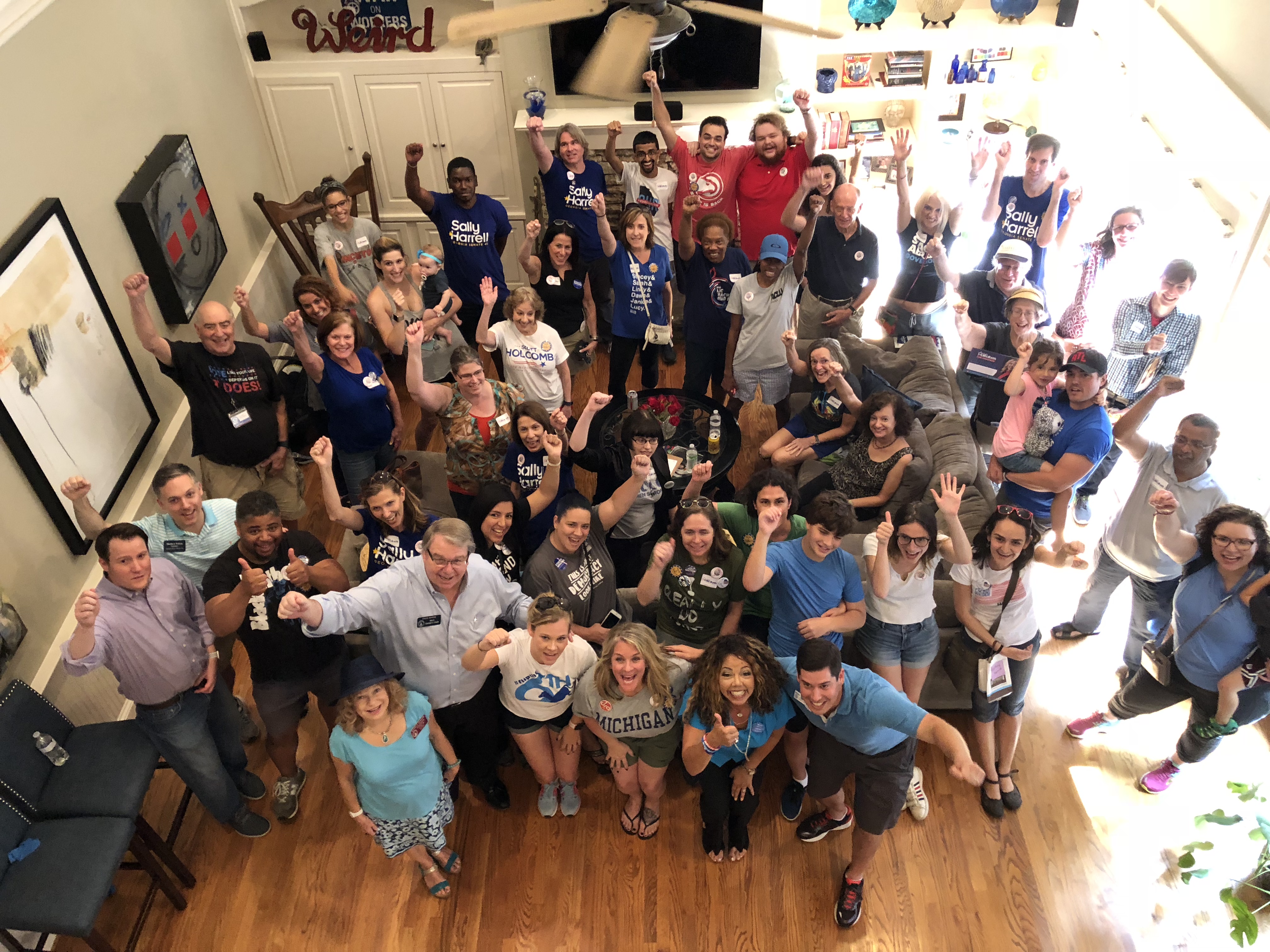 Tracy Prescott didn’t expect a big crowd at her Northlake home Saturday afternoon—just another campaign event on her packed calendar, and more importantly, a chance to get people out knocking on doors. But there was a huge response, and thanks to Prescott and her husband, Jeff Corkill, Sixth District Congressional candidate Lucy McBath, a Cobb resident, is getting the blue carpet treatment in DeKalb. The Democratic activists, who both served as delegates to this year’s state Democratic Convention, recently hosted a meet-and-greet for the candidate, as well.

“I am the mother of Jordan Davis”

Lucy McBath rose to national prominence as a spokesperson for Everytown for Gun Safety and Moms Demand Action for Gun Sense after her son, Jordan Davis, was murdered in a dispute over loud music. One of the Mothers of the Movement, the former Delta flight attendant spoke at the 2016 Democratic Convention. McBath planned at first to compete for State House District 37 in Cobb County, but the Parkland High School shootings convinced her to run for national office. I was in the middle of writing a post about her when I learned she’d switched.

She is different from other politicians. A few weeks ago, McBath, dressed in cutoffs and campaign T-shirt, opened he DeKalb office on Northlake Parkway, just a few blocks away from Prescott’s home. When she was introducing a family friend to volunteers, a memory of Jordan caused a tear to trickled down her cheek.

As usual, she bounced back quickly.

Having transcended a tragedy, she exudes hope and graciousness—in sharp contrast to her opponent, a career politician, uninspiring at best, who believes crying children should be gaveled into order.

A poised and confident public speaker, McBath talked briefly Saturday about her signature issue, stopping gun violence, pointing out that her opponent has NRA backing. Calling healthcare “a moral right,” she also focused on women’s health, and improving educational opportunities.

Momentum is on our side – and we can feel it. I am honored to stand with so many hard working people across #GA06 to bring real change to Washington. #gapol pic.twitter.com/bW02OuN3oc

“The bluest part of the Sixth”

The Sixth District covers northern Atlanta suburbs in Cobb, Fulton, and DeKalb. Before leaving for one of her countless meet and greets Saturday, Senate District 40 candidate Sally Harrell welcomed McBath “to the bluest part of the Sixth.”

While DeKalb represents the smallest share (about 100,000 voters), it is also the most Democratic. Ossoff took 58.5 percent in DeKalb. (Click for link to interactive map)

Hillary Clinton took the 40th over Trump by double digits in 2016. The same was true for the 79th, 80th, and 81st House districts contained largely within the Senate district.

A heavy turnout in DeKalb is crucial to a McBath victory. The good news: A bigger margin than Ossoff’s is possible, because North DeKalb is a hotbed of Democratic activity, and candidates are coordinating.

The 40th is Georgia’s most flippable Senate district, and Harrell–a former three-term State Representative who has yet to lose a race, has built a formidable campaign in her bid to unseat Sen. Fran Millar. Many of her volunteers are battle-hardened Ossoff veterans. Tracy’s state Rep, Scott Holcomb (HD81), who lives just a few doors away, dropped by to show support, as did two House candidates—Michael Wilensky (HD79) of Dunwoody and Matt Wilson (HD80) of Brookhaven. Holcomb has an excellent record and a horrible opponent. Wilensky and Wilson also have strong campaigns. GOP Rep. Meagan Hanson won the 80th in 2016 by less than 300 votes, and the 79th is open. The Repubican incumbent in the 79th, Tom Taylor, declined to run for another term following his DUI conviction. A sweep of these four races Nov. 6 will make DeKalb’s legislative delegation completely blue.

Synergy alert: In DeKalb, the Sixth’s lines closely resemble the 40th’s. Only five of McBath’s DeKalb precincts lie entirely outside the 40th, and 85 percent of the Senate district is in the Sixth.

Can Lucy do what Jon Ossoff couldn’t?

The mood Saturday was cheerful, confident, and enthusiastic. In North DeKalb, there is much for Democrats to be confident about. After the speeches were over, as more than a dozen canvassing assignments were being handed out to volunteers, I heard journalist Joan Walsh, covering the campaign for The Nation, asking a woman how this year’s race differed from Ossoff’s effort last year. The woman said that the situation was better, because volunteers were more organized.

I’d agree. Many volunteers aren’t rookies anymore. Last year, the scene at an Ossoff office could be overwhelming, with more than a hundred neophytes showing up in a parking lot not knowing what to do. Canvassing is more coordinated than 2017’s “Shock and Knock,” that turned into irritating overkill. What the McBath campaign may lack in sheer numbers, it more than gains in organized allies. It also helps that she lives in the district. Just saying.

While McBath’s campaign won’t have the ridiculous amount of money of Ossoff or Handel, she may not need it. In the end, Democratic enthusiasm, and therefore turnout will be the key. Host Prescott saw that Saturday, and she marveled not just at the great quality of Democratic candidates, but also the diversity of their supporters. That, too, will be a key to turnout. If there’s a significant Blue Wave, Lucy McBath will be one of the first beneficiaries.