First, about those push polls

A “Push Poll” is Not a Legitimate Poll:  A so-called “push poll” is an insidious form of negative campaigning, disguised as a political poll. “Push polls” are not surveys at all, but rather unethical political telemarketing — telephone calls disguised as research that aim to persuade large numbers of voters and affect election outcomes, rather than measure opinions. This misuse of the survey method exploits the trust people have in research organizations and violates the AAPOR Code of Professional Ethics and Practices.– From American Association for Public Opinion Research 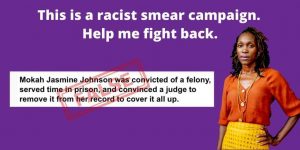 A recent push-poll of Georgia House District 117 voters in and around Athens made serious accusations against Democratic candidate Mokah Johnson, claiming that she’s a convicted felon and worked to “to cover it all up.” Her campaign believes the charges are legally actionable. Sleuthing will be required to find the perpetrator, since it’s identified as “votersurvey.com,” and there appears to be no such website.

Allies have rallied to Johnson’s defense. Many people consider the attack racist; several have accused her opponent, State Rep. Houston Gaines of dirty politics. With a cagey response on Facebook, Gaines denied responsibility: “I’d like to confirm that despite false claims, my campaign has not conducted polling of any kind this election cycle.”

This election cycle. Huh. See, this isn’t the first time Gaines has been accused of using a push-poll. In 2018, during Gaines’s successful effort to unseat Rep. Deborah Gonalez, Oconee County blogger Lee Becker reported receiving a  push poll for Gaines.

Gonzalez, currently a candidate for District attorney in the judicial circuit covering Clarke and Oconee counties, wrote recently about Gaines’s tactics in a Facebook post. In addition to a push-poll, she said he used deceptive mailers, adding, “It is a shame that these GOP candidates believe the only way to keep their seats is to lie, defame, belittle and play dirty politics.” In a separate post, she wrote: “It is not enough to just say  ‘I didn’t do it.’ Why isn’t Gaines denouncing it and ensuring that it will not be used in his campaign at all–by him or anyone supporting his candidacy?”

Fine. Him or his allies, then.

On his own page, Gaines has yet to respond to this reply to his denial: “Will you condemn these types of false attacks though? Slandering a black woman for a criminal record is a blatant racist dog whistle and should have no part in politics. Whether your campaign was involved or not, it was conducted for your benefit.”

So, Gaines’s response hangs in the air, smug, opaque, and a tad bit amoral. I’m willing to say he may not have been directly involved, but I wouldn’t bet money that he doesn’t see the results. After all, it was clearly done for his benefit, so why waste the effort. And we are dealing with the GOP here.

Johnson, a longtime activist who, has pushed back forcefully against what she called “a racist personal attack and blatant lies about me.”  She also is using the incident as a springboard to broaden the conversation. Johnson tweeted, “I’d like to thank my opponent & his allies for giving me this opportunity to share my story & how it continues to inspire my work toward criminal justice reform.”

To set the record straight, Johnson told her story on her website:

Twenty-five years ago, when I was 20 years old, I got caught up in the same unjust mass incarceration system I’m currently working to dismantle. My boyfriend and I were driving back home from college when we were targeted by an undercover cop. Because my boyfriend purchased $5 worth of marijuana from this officer while I was present, I was also arrested.

Our arrests were part of a sting operation so large that there weren’t enough jail cells to hold everyone arrested that night. As a result, the officers took us to an open field where we waited for several hours. When we finally were taken to the jail and I passed a drug test, I was released quickly. I spent no time in a jail cell, but I was charged with a misdemeanor.

My story is not unique. Black people are 3.73 times more likely than white people to be arrested for marijuana possession, despite equal rates of use. Marijuana arrests have continued to climb since 1990, with 6.1 million marijuana-related arrests occurring between 2010 and 2018. Young people are disproportionately hurt by this system, with 42% of people admitted on marijuana charges in Georgia between the ages of 20 and 29. Enforcement of marijuana possession laws costs American taxpayers $3.6 billion annually while inflicting lasting damage on communities of color.

For example, as a first-time offender, I pleaded no contest to save my hard-working, immigrant parents from having to pay legal fees. I was told my misdemeanor charges would be dismissed once I completed my community service. However, the charge continued to follow me and was inaccurately recorded as a felony. On numerous occasions, this interfered with my ability to secure jobs and housing. In order to free myself from this burden, I successfully filed for expungement. Clearing my record gave me a chance to begin anew. Twenty-five years later, I’m a proud mother and grandmother, a dedicated educator, a successful entrepreneur, and a powerful activist.

She goes on to discuss the criminal justice system and its impact on marginalized citizens, highlighting differences between herself and her opponent  It is well worth reading,

In her Twitter thread, Johnson tweeted “While our opposition may believe my story is a weakness, I know that many of the people I seek to represent recognize the failings of our criminal justice system.”

After his smug-ish Facebook denial, Gaines went on to take credit for his role in passing Senate Bill 288, a criminal justice reform bill. Sponsored by Sen. Tonya Anderson and five other Democrats, SB 288 is second-chance legislation, allowing the removal of a person’s misdemeanor conviction from public records after four years of clean living. which passed both chambers unanimously. So, every state legislator believes a person’s  past misdemeanor offenses shouldn’t be held against them–unless it can be used in a political campaign.

Johnson noted the irony, as well:

While my opponent touted the economic benefits of the reforms, these attacks made on his behalf reveal a failure to understand the human costs of this system.

My opponent built his political career on his grandfather’s work as a superior court judge. Yet, he fails to see that we have two justice systems in America: one that is deeply forgiving to wealthy, well-connected white people, and one that is brutal to poor people of color. As soon as it became politically advantageous, my opposition cynically leveraged the results of this systemic racism in an attempt to block me from yet another new job: State Representative.

While Johnson is a fierce advocate for bail-bond reform, her opponent has different ideas. In 2019, along with neighboring HD 119 Rep. Marcus Wiedower, Gaines cosponsored House Bill 340, which noted in an article by the Southern Center for Human Rights as

… a measure which would overturn bail reform in Atlanta, and preclude any other city or county in Georgia from ending cash bail. The legislation would force burdensome costs on Georgians; it would continue to criminalize poverty and race; it would compromise public safety; and, finally, it would be unconstitutional. The only beneficiaries of the legislation would be the bail industry. The bill’s sponsor, Representative Micah Gravley, presented the legislation while flanked by four individuals from the bail industry.

The bill went nowhere, but you get an idea of where it’s coming from. Gaines’s mixed record on criminal justice reform makes him eligible for the “Irony is Dead” Award.

On the other hand, Johnson recognizing the opportunity the GOP gave her with it’s attempted vilification, perform a public service, publishing a guide to help people clean their criminal records. Because justice is her Number 1 priority. 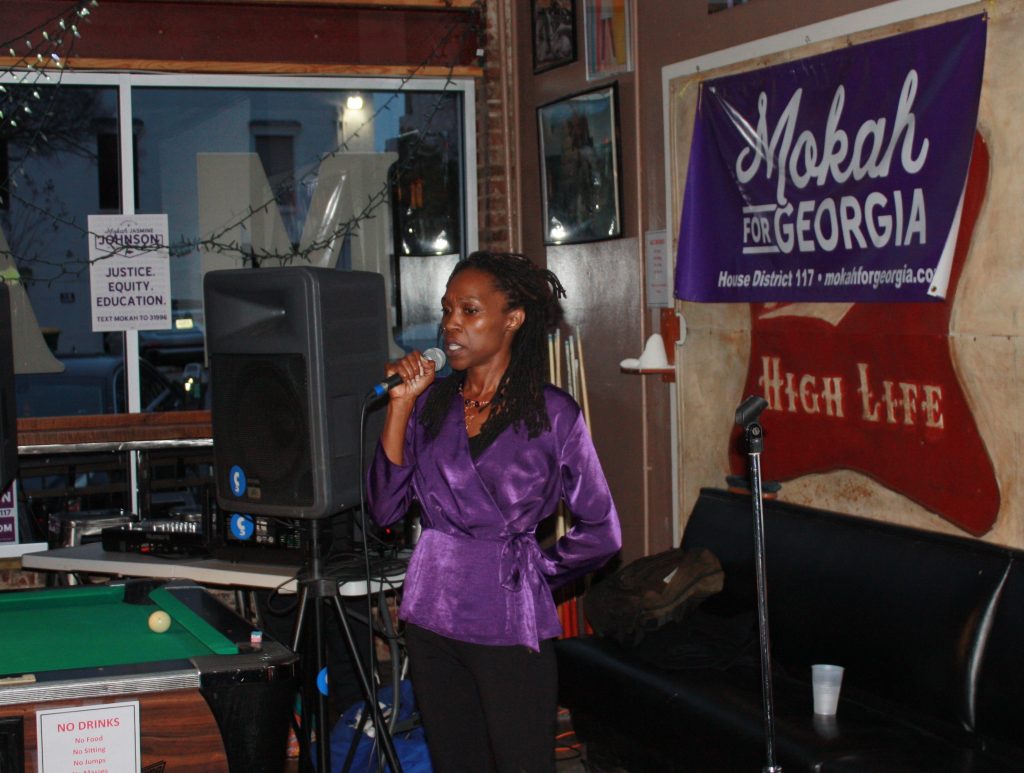 Jasmine “Mokah” Johnson speaking at her kickoff rally in January

Somebody should do something

That would be you, if you believe the GOP and its candidates shouldn’t benefit from dirty politics, donate to Mokah Johnson’s campaign. While she’s had success raising money, Gaines, an endangered GOP incumbent in Brian Kemp’s hometown, sits on fat stacks of cash.  It should be a close race between what’s probably the most disparate pair of opponents in the state. House District 117 has flipped twice in the past three years, and it’s one of Georgia Democrats’ top targets in plans to win a majority of House seats. This, despite the fact that Blue Clarke County has been expertly gerrymandered to dilute Democratic voting strength by cutting it up and offsetting it with precincts from neighboring rural Red  Oconee, Barrow, and Jackson counties (see map at right). Bear in mind, however, that slightly more than half the district’s voters live in Clarke.

Make no mistake: Athens is a top battleground this year, with two House seats and a high-profile, fight-for-justice District Attorney’s race on the ballot. I’ll be writing more on that topic soon and posting a link, so check back.

I recently wrote about the other Jackson County House Race in District 31:  Georgia Rep. Tommy Benton is a Lost Cause. Will Jackson County voters say “Enough’s enough?”