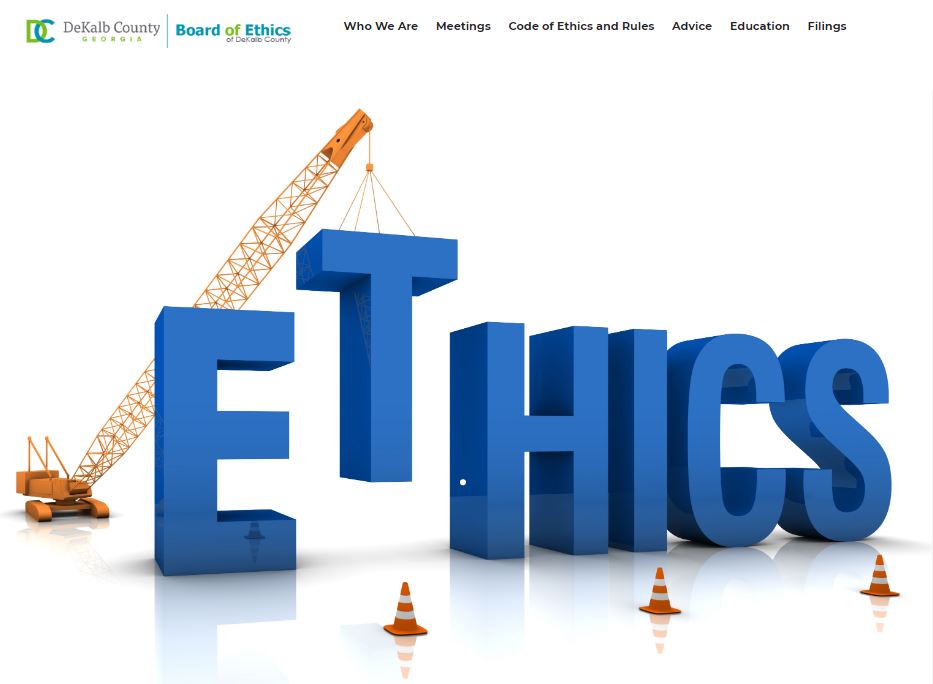 DeKalb Ethics Board: Is this construction—or demolition?

Update: Turns out the referendum gets some love–from the DeKalb NAACP, which has issued a limited edition statement urging a “yes” vote (posted below, at end of this article). This shouldn’t be surprising, since the local civil rights organization has had an antithetical relationship with the board. Check out chapter President Teresa Hardy’s comments in this AJC article on the Supreme Court ruling against the Board’s appointment process, which ends with this sentence: “The NAACP had initially asked to be one of the outside groups that made appointments to the board.” Interesting.

After observing three town halls, I’ve seen no public support for DeKalb’s ethics referendum. Here’s why: It’s a sausage monster, ground out in a back room at the Capitol. In the dark.

The way it’s written Senate Bill 7 sets up the Nov. 5 referendum as a downgrade to DeKalb’s Ethics Board. The legislation started out simply, as a way to fix a legal flaw in the board’s makeup, but ended up looking like something out of The Fly (Jeff Goldblum version, not the Vincent Price classic).

In 2015, the General Assembly passed HB597 to reform and empower the DeKalb Ethics Board. These changes came after a two-year process that involved citizen participation, according to Mary Hinkel of the Dekalb Citizens Advocacy Council. The referendum enacting the reforms was approved by 92 percent of DeKalb voters. No longer would DeKalb’s CEO and the County Commission make all the appointments. As the Supreme Court noted in its 2018 decision, “Because the Board of Ethics could be tasked with investigating the CEO or county commissioners with respect to potential ethics violations, HB 597 was crafted to eliminate the possibility that the very people being investigated would be the same ones who were appointing the investigators.” 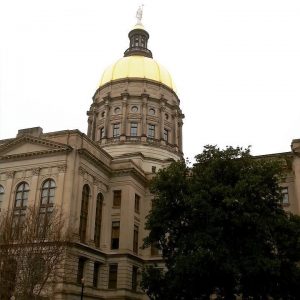 The 2015 act required the appointment of four members by non-governmental organizations (DeKalb Bar, Chamber of Commerce, Leadership DeKalb, and a group of local colleges and universities) and three by elected officials (DeKalb legislators, probate judge, and chief judge of Superior Court). The Board soon faced a court challenge by DeKalb County Commissioner Sharon Barnes Sutton, whose case had come before the panel. Sutton’s attorney, Dwight Thomas, filed suit claiming the Ethics Board’s makeup was illegal.

A trial judge agreed. In 2018, the case was decided by the State Supreme Court, which ruled that private entities couldn’t appoint public officials. (That ruling has opened up a can of worms—still unresolved—for public agencies across Georgia, notably county elections boards, whose members are often picked by political parties.)

After the four illegally appointed members were gone, the Ethics Board was hobbled. Without a quorum, the staff could take complaints, open cases, and investigate, but there could be neither official meetings nor rulings.

In 2017, DeKalb legislators had seen the legal writing on the wall and attempted to fix the appointment problem with SB273. This was a longish bill, 16-18 pages in various forms. Among other things, it gave DeKalb’s legislative delegation authority over appointments to the board. The bill passed both chambers, but in different versions. The General Assembly ended without the versions being reconciled. Acrimony surrounded the issue, and it remained unresolved in 2018. Tick Tock.

That year’s Supreme Court ruling forced the issue, so Sen. Emanuel Jones introduced a bill to fix the appointments process. It seemed a simple enough task. Indeed, SB7, as introduced by Sen. Emanuel Jones, was a clean bill. Those four non-government appointments would become the responsibility of DeKalb legislators, two each by the House and Senate delegations. The probate judge and chief judge of Superior Court would still have appointment power. The County Commission would have one appointment, and—this is noteworthy—a requirement for a referendum was removed from the first draft. This was a clean fix, or would have been. 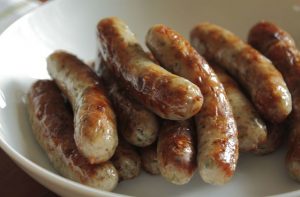 Then SB7 moved over to the House, where it was sponsored by Rep. Pam Stephenson. In what’s been described as a hasty process devoid of public participation—except for Sutton’s now former attorney Dwight Thomas—certain adjustments were made. “Making changes without securing citizen involvement—I find that very disrespectful,” Hinkel said.

Rep. Mary Margaret Oliver’s assessment was blunt: “We messed it up.”

Appointment authority was shifted from the County Commission to DeKalb’s CEO, subject to Commission approval. The referendum was reinstated. Other changes would substantially weaken the board (see below). Controversy ensued. The DeKalb House delegation voted 7-6 vote to approve the substitute bill. More acrimony: The county’s north/south split–in other words, race–became an issue.

Because this was local legislation, lawmakers from other counties deferred to the DeKalb delegation and it passed with an overwhelming majority. The Senate agreed to the House bill at the end of the session, and that’s how this particular sausage was made. Sine die and la-de-da.

Public opinion has been harsh

Since its passage, SB7 and its resultant referendum have received much negative news coverage. My favorite is Bill Torpy’s takedown. In pushback to criticism about process and product, SB7 supporter Rep. Doreen Carter said: Trust us. This being DeKalb, the public has other ideas.

Jones came to the first two town halls, in Lithonia and Tucker, but by the end of the second town hall in Tucker, he was done after some testy exchanges with referendum opponents. Other legislators kept going, holding the 3rd and 4th meetings on schedule. SB7 supporters Reps. Doreen Carter and Renitta Shannon appeared at the Decatur town hall; in Brookhaven Monday night, all speakers opposed the referendum.

DeKalb resident Paul Wolpe, who also happens to head Emory University’s Ethics Center, called the original 2015 ethics bill, sponsored by Rep. Scott Holcomb, “close to model legislation for integrity and ethics in county government,” and said he strongly opposed the revisions to that code in SB7, adding, “I cannot find an actual justification for the revision.”

He pointed out four problematic changes: First, that potential whistleblowers would have to first go through the county’s Human Resources department. “I’ve never seen that before, and it makes no sense to go through levels of bureaucracy to file a complaint,” he said, claiming he’d never seen that requirement before in the forty years he’d worked in the field. “It doesn’t make any sense.”

Also, Wolpe harshly criticized the bill’s provision that would downgrade the Board’s legally trained ethics officer to “ethics clerk.” Wolpe argued that the purpose of an ethics officer isn’t just to investigate cases, but to serve as a trainer and a reference source on ethics questions. An expert, not a “paper pusher,” as Hinkel has described the role of the ethics administrator, who would not require a law degree under the new bill.

The role of the head staffer is a major point of contention. The bill’s supporters have accused the Ethics Officer of “overreaching,” which sounds like they would feel more comfortable with a less formidable watchdog than Stacey Kalberman, who has a reputation for toughness, having taken on Gov. Nathan Deal back in the day. And got fired. And sued. And won a million dollars.

Wolpe also criticized the bill’s provision that allowed the Board of Commissioners to approve the Ethics Board’s policies and procedures, as well as the appointment of a board member by the DeKalb CEO, ratified by county commissioners.

In addition to Wolpe, Hinkel and several other members of the Citizens Advocacy Council took the podium in Brookhaven. This is the organized opposition, and you can go to their website to learn more about the downsides of SB7, download printable handouts—or order a yard sign.

During her remarks, Hinkel had referred to the “troubled history in the county with ethics,” noting the cases of three recent county commissioners: Elaine Boyer (sentenced to prison), Stan Watson (pleaded guilty to theft) , and Sutton (currently under indictment).

Hinkel said that independent assessments of procurement policies and procedures and departments showed the lack of an ethical culture. Even after the town hall, members of the public remained perplexed about the legislative process that produced SB7, and why DeKalb County officials think gift cards can be handed out like candy to county employees. (I didn’t know that was a thing.)

The six House members who voted against SB7 in the delegation meeting during the session were at the Brookhaven meeting: Reps. Holcomb, Oliver, and Matthew Wilson, Mike Wilensky, Michel Henson, and Becky Evans. Holcomb reiterate the concern he’d brought up in a post-session newsletter:

Among other changes, the bill removes the position of Ethics Officer and prohibits the Board of Ethics from rendering a final decision in the 45 days preceding an election. These are two of several changes that made no sense to me. If a person was found not to have committed wrongdoing, then voters should know that. Likewise, if the Board found that someone had committed wrongdoing, then voters should know that too.

Neighbors in DeKalb–Ahead of tonight's Brookhaven Town Hall, I'm curious. How do you plan to vote on the DeKalb County…

Yeah, it’s a Facebook poll. TBH, a survey taken at town halls wouldn’t be this close

This will be a low turnout election, making the outcome difficult to predict. It also means every vote will count more so than usual. In 2015, in addition to the ethics referendum and municipal elections, there were two cityhood initiatives and two special legislative contests. Countywide turnout was about 13 percent. Only 14,000 voters showed up to vote only on the referendum.

While there are two more cities now (Stonecrest and Tucker), and about 100,000 more registered DeKalb voters, the ethics referendum is the only thing on the ballot for voters in unincorporated areas. Early voting has been less than a half-percent, and total turnout, depending on interest in municipal races, will likely be similar to 2015’s, in the low double digits. Early voting is ongoing through Friday, Nov. 1 in four locations. Click here for details.

In 2015, there was an organized push to pass the referendum, but this time, there’s no organized support. Still, it contains the word “ethics,” so it’s likely to draw voters from people who are unfamiliar with the measure’s details–which will not be on the ballot. The question will simply read: “Shall the Act be approved which revises the Board of Ethics for DeKalb County?” Exactly the exact same question that was on 2015 ballots, even though it’s not the same thing at all.

The more people know about the bill, the more likely they’ll vote against it. But getting the word out isn’t easy. Several legislators are urging their constituents to vote “No” and municipal candidates have incorporated opposition to the referendum in their campaigns.  Hinkel’s group is feisty but small, and lacks a substantial social media footprint, so interested citizens should feel free to talk it down to their friends and neighbors.

It’s worth noting–and maybe even somewhat surprising–that Rep. Viola Davis, who built her reputation filing ethics complaints, voted for SB7. However, Davis said at Decatur’s town hall that she did favor having an ethics officer (as opposed to the lower-level administrator). She said she had a plan to move forward if the referendum passed, and another one if it failed. She’s not the only legislator already contemplating new legislation, because whatever happens, repairs will be needed.