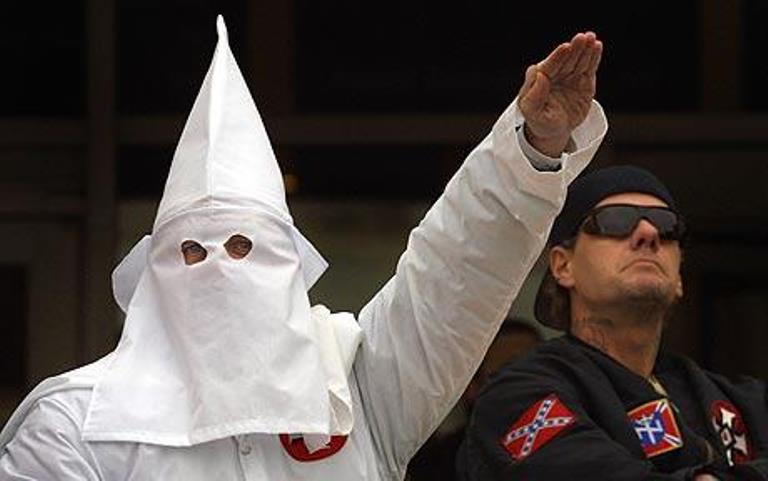 Media are reporting on a KKK recruiting drive in suburban Tucker: “Help us fight the spread of Islam in our country,” Klan flyers state. The hate group senses an opportunity in North DeKalb, since the GOP is running rabidly Islamaphobic GOP House candidate Ellen Diehl against Democrat Rep. Scott Holcomb, one of the state’s most effective legislators, regardless of party.

Diehl has presented herself as a mainstream candidate. She is not. She is a Trump fanatic, a bona fide deplorable, and she made a ton of YouTube videos  because she was loud and proud about it. But once the videos were exposed in the media, she took them down. Fast. Sadly for her, someone made copies.

She’s all Trump, all the time, and her YouTube rants were Trumpian in their awfulness:

“Barry Soetoro Hussein Obama was Muslim, let him say what he wants. Let him go around going (makes high-pitched tongue trill) or whatever they do. I don’t think that Michelle is going to wear a burka. She’s ugly enough to wear a burka. Oh I said it. And she gonna need an extra large. Did you see how big her butt was on Inauguration Day?”“

Even worse, my State Senator, Fran Millar, supports her, even after she was exposed as a hardcore hater. He’s become a liability to Senate District 40. and he’s embarrassing himself. To be fair, he’s never faced a serious challenger.  Now that he’s got one, he’s losing it. He started out by lying about his opponent’s record. Now he’s swatting at ghosts. He recently replied to a 2016 tweet, thinking it was a last-minute attack. LOL. I hope he’s better at replying to emails than he is on Twitter, but all this newfangled stuff can be difficult.

Vote for Sally Harrell, instead. She won’t embarrass you.

What a bunch of garbage. Typical Dem last minute attack.