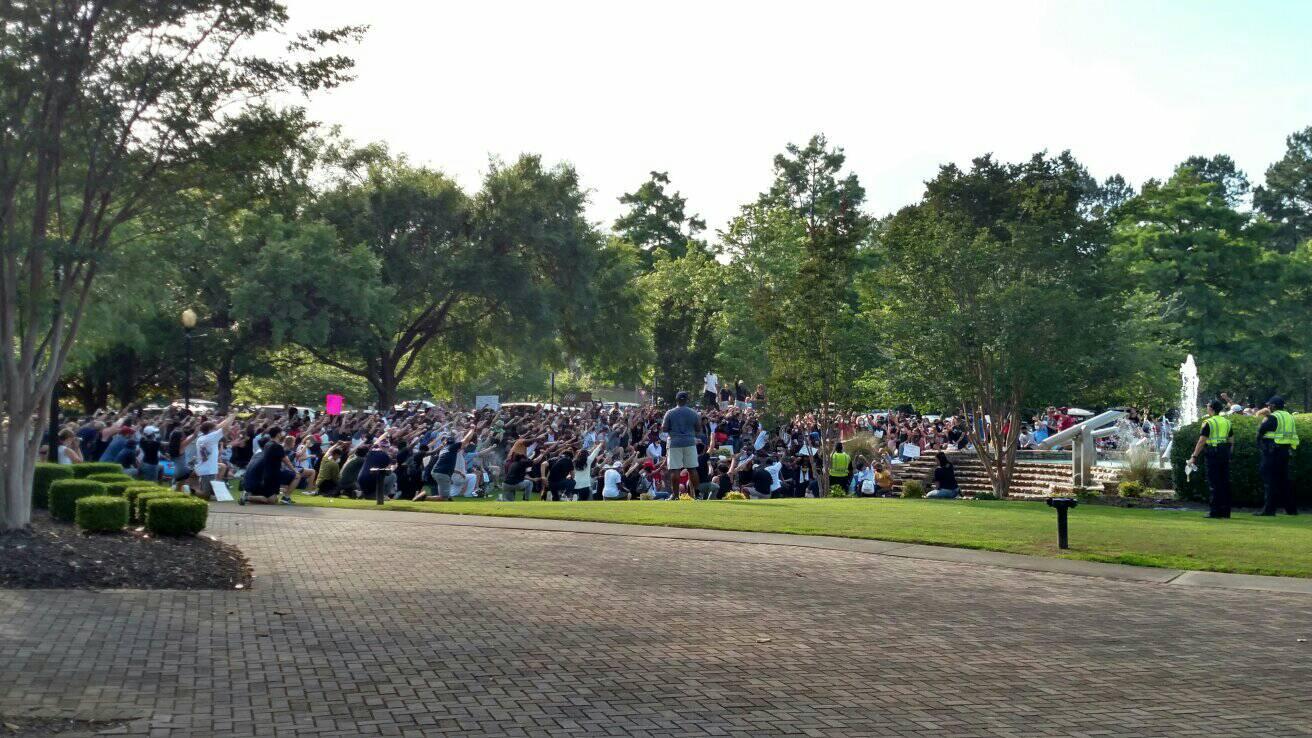 Jill Prouty stepped outside the library she manages in Peachtree City on Tuesday, June 2, and observed a wondrous sight: Hundreds of people kneeling on the lawn of the City Hall complex. In the land of golf carts, they had marched to protest police brutality and racial injustice. Peachtree City Police Chief Janet Moon walked with them. It was as peaceful as peaceful could be. The hastily organized solidarity protest drew a crowd of 400 people, perhaps more. You can read local news coverage here. Lots of pictures. Many young people chanting “Black Lives Matter.”

“It gave me chills,” said Prouty, who is also the Democratic candidate for Georgia House District 71 in Fayette and Coweta counties. “It was the biggest protest I’ve ever seen here.”

It was especially heartening to Prouty because she had been disappointed, but not at all surprised, by the reaction of her GOP rivals to the killing of George Floyd by the Minneapolis Police. Like national Republicans, both HD 71 candidates Marcy Westmoreland Sakrison and Rep. Philip Singleton “march in lockstep with President Donald Trump,” as Prouty puts it. 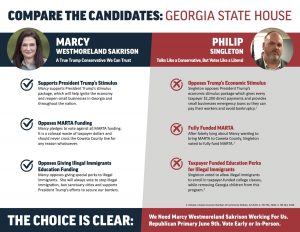 Both Sakrison and Singleton have publicly praised Trump’s response to unrest following Floyd’s death, even though it has been nothing short of horrific. That’s because he’s more concerned about getting a photo op  and acting like a tough guy than he is about the U.S. Constitution or people’s lives, And when Sakrison and Singleton aren’t vying for the crown of “most MAGA,” they fight over who hates MARTA and public transportation more. They’re both blind reactionaries with, shall we say, a lack of empathy for people who have been marginalized.

Prouty felt compelled to issue a statement on what she sees as their unfitness to serve. You can read it below.

While the House district is deep red, Prouty–a small business owner running on a platform of “Democratic Capitalism”–thinks it’s the right time to challenge the regressive politics of Rep. Singleton and his ilk. She competed in last year’s special election and is running hard this year.

While she came in third in a low-turnout contest, won by Singleton against Sakrison in a bitter runoff, Prouty notched a remarkable achievement. She won a majority of votes in HD 71’s Peachtree City precincts. No Democrat had managed to pull that off before.

And now the protest march gives her even more hope. “Maybe a new day is coming,” Prouty said.

On June 9, Georgia House District 71 voters will pick a Republican candidate to face me on Nov. 3. Unfortunately, they won’t have much of a choice. As was the case in last year’s special election, both Marcy Westmoreland Sakrison and Philip Singleton march in lockstep with President Donald Trump. As a result, neither candidate can speak thoughtfully or compassionately about the terrible divisions Americans face today, especially on issues of racial inequality and injustice.

Their failure to demonstrate any independence from Trumpism and the world of MAGA hobbles their spirits and makes them ill-suited to serve all the citizens of the District. Rep. Singleton pursues a fringe right-wing agenda and ignores the killings of black citizens by police; Sakrison endorses the mistreatment of immigrant children (she “opposes giving illegal immigrants education funding”). Neither accurately represent the District that I have known and loved for 20 years.

Coweta and Fayette counties deserve better. Georgia deserves better. After June 9, the campaign for the soul of this district begins in earnest. As a professional librarian with over 20 years of experience, inclusivity and equal access are the tools of my trade. Please join me in working to make things better – for all.

To learn more about my campaign, visit my website: https://Jill4GA.com